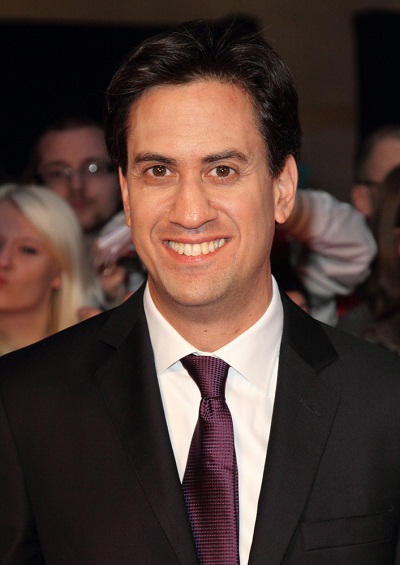 Miliband in 2013, photo by PrPhotos

Ed Miliband is a British politician. He served as leader of the Labour Party, and thus Leader of the Opposition, from 25 September, 2010 to 8 May, 2015, among other duties. He has been a Member of Parliament for Doncaster North, since 5 May, 2005. His brother is politician David Miliband. The two brothers both ran for the party’s leadership in 2010, with Ed narrowly winning over David.

His father, Ralph Miliband, was a famous Belgian-born Marxist academic, of Polish Jewish origin, who fled with his parents to England during World War II. His mother, Marion Kozak, a human rights campaigner and early CND member, is a Polish Jew who survived the Holocaust, being protected by non-Jewish Poles.

Ed is married to barrister Justine Thornton, with whom he has two children.

Ed’s paternal grandfather was Samuel Miliband (the son of Zyndel Gershon Mileband and Chana Leah Auslender). Zyndel was the son of Abram Moise Miliband and Esther Tempeldiner. Chana was the daughter of Abraham Ytszak Auslender and Rebecca Rachel Fiszman.