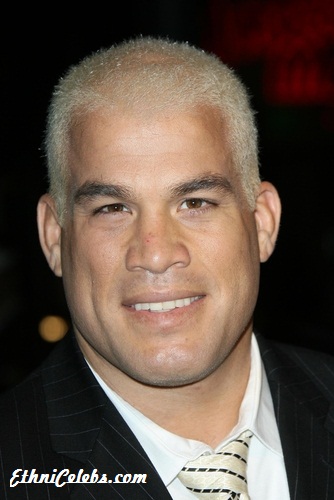 Tito Ortiz is an American mixed martial arts fighter. He is also known as The Huntington Beach Bad Boy.

He is the son of Joyce and Samuel Ortiz. His father was born in Santa Ana, California, of Mexican descent. His mother was born in Hilo, Hawaii. In an interview on Vlad TV, Tito stated that he has Native American, Mexican, African, Creole, Hawaiian, Portuguese, Irish, French ancestry, the latter three specifically from his mother. It is not clear if all of these lineages have been verified/documented.

Tito’s maternal grandfather was named Herman. Herman was a Pentecostal missionary. He had Irish ancestry.

Tito has stated that his maternal grandmother was from Portugal. He added that she also had French ancestry.

It seemed as I got older and as I got more mature, I started realizing that I have to accept where I come from. My father is from Santa Ana. His father is from Mexico City and I went to Mexico City about four years ago and I really looked at my heritage, seeing where my grandfather came from and I just kind of took it to heart.  Why not embrace both heritages? And that’s what I do. My father’s full-blooded Mexican [and] my mother’s full-blooded American, so I grab a Mexican and an American flag. It’s what makes me strong when I walk into the Octagon.