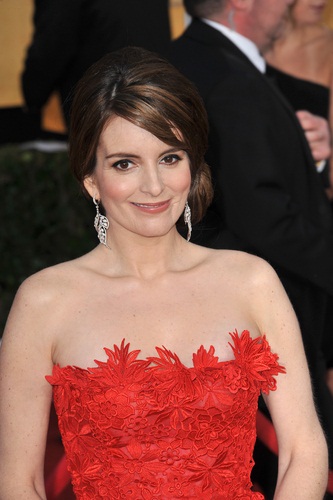 Fey in 2011, photo by Featureflash / Shutterstock.com

Tina Fey is an American actress, comedian, writer, and producer. She is famous for her comic portrayal of the former Governor of Alaska, Sarah Palin.

Tina is married to composer, actor, director, and producer Jeff Richmond, with whom she has two children.

Tina’s paternal grandfather was Heinrich “Henry” Fey (the son of Charles Fey and Betty/Bettie Roessling/Rosling). Heinrich was born in Pennsylvania, to German parents. Charles was from Reifferscheid, Prussia, and his mother’s name was Mary.

Tina’s paternal grandmother was Mildred Ada Ritchie (the daughter of Robert Cowan Ritchie and Lillian May/Mae Prentzel). Mildred was born in Pennsylvania. Robert’s father, Robert John Ritchie, was born in Pennsylvania, to parents from Ireland, and Robert’s mother, Matilda Anderson, was from Ireland; the family was likely of Protestant Northern Irish descent. Tina’s great-grandmother Lillian was the daughter of Charles S. Prentzel and Margaret Van Hook Vaughan, and had German and English ancestry.

A DNA test whose results were displayed on the show Finding Your Roots with Henry Louis Gates, Jr. (2014) stated that Tina’s genetic ancestry is:

Genetically, she was found to have a common ancestor with actor Tony Shalhoub, through her mother’s side.

In his 2016 book about the show, Finding Your Roots, Season 2: The Official Companion to the PBS Series, Henry Louis Gates, Jr. wrote that almost half of Tina’s European DNA originates in Greece and/or Italy, and a quarter in the U.K., with her European DNA being split at about half between Northern and Southern Europe.