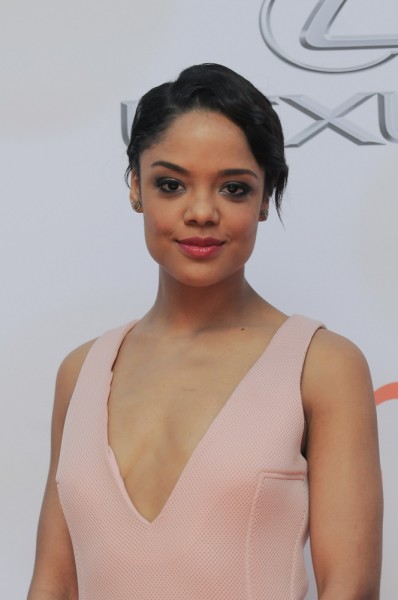 Thompson in 2015, photo by Prphotos

Tessa Thompson is an American actress and musician. She is known for starring in Creed, the Thor films, Men in Black: International, and Passing, among others.

Her father, Marc Anthony Thompson, is a singer and songwriter, for the band Chocolate Genius, Inc.

Tessa’s father is of Panamanian [African-Panamanian] descent. Tessa’s mother is of half Mexican and half white American [English, German, Scottish, Irish] ancestry. A picture of Tessa with her mother can be seen here.

Tessa has played the role of an African-American and biracial woman in her career. In the 2010 film For Colored Girls, Tessa was one of nine actresses depicting the lives and struggles of women of color. In the 2014 film Dear White People, Tessa played a biracial college student dealing with racial tensions within Ivy League schools.

…my grandfather, was of Mexican descent. He was a [Hispanic] performer in a time where there were very few of them. He was the only, very often, and I think because of this, he had a real pressure to assimilate because he didn’t want my mother to speak Spanish… My mom is a woman of color even though she might not be readily identified as such… Even though she is not a Black woman, throughout my life, she filled me with such pride of being one… She told me that my broad features and my brown skin looked beautiful when classmates did their best to convince me otherwise.