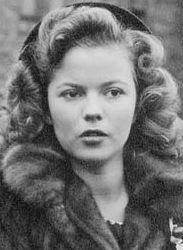 Shirley Temple, also known by her married name Shirley Temple Black, was an American actress, singer, dancer, businessperson, diplomat, and public servant. She is known for starring in the films Bright Eyes, Curly Top, Heidi, A Little Princess, Poor Little Rich Girl, Dimples, Rebecca of Sunnybrook Farm, and That Hagen Girl, among many other roles. She served as the U.S. Ambassador to Ghana, from December 6, 1974 to July 13, 1976, Chief of Protocol of the United States, from July 1, 1976 to January 21, 1977, and the U.S. Ambassador to Czechoslovakia, from August 23, 1989 to July 12, 1992.

Shirley was the daughter of Gertrude Amelia (Krieger) and George Francis Temple. Her father had Scottish, English, Dutch, German, and remote Norwegian, ancestry. Her mother had German and Irish ancestry.

Shirley was married to businessperson Charles Alden Black, until his death. She had a daughter with her former husband, actor John Agar; and two children, including musician Lori Black, with Charles. Charles was the son of James Black, president and chairman of Pacific Gas and Electric.

Shirley’s paternal grandfather was Francis Marion “Frank” Temple (the son of Reuben/Reubin Smith Brown Temple and Jane W. Dunham). Francis was born in Pennsylvania. Reuben was the son of Robert Temple, whose father was Scottish, and of Eliza Allen, who was of Colonial American (English) ancestry, with deep roots in Connecticut. Jane was the daughter of Daniel Dunham and Amelia.

Shirley’s maternal grandfather was Otto Charles/Julius Krieger (the son of Karl Krieger and Wilhelmina Henkelmann/Hinckelmann). Otto was born in Illinois, to German parents. Karl was born in Jettenbach, Upper Bavaria, Bavaria, the son of Johann Michael Franz Krieger and Maria Magdalena Plauth/Blauth. Wilhelmina was born in Haschbach am Remigiusberg, Rhineland-Palatinate, the daughter of Adam Hinkelmann and Philippina Müeller.

Shirley’s maternal grandmother was Maude Elizabeth McGrath (the daughter of Thomas H./Frank McGrath and Amelia Charters). Maude was born in Michigan, to an Irish father and a Canadian mother.