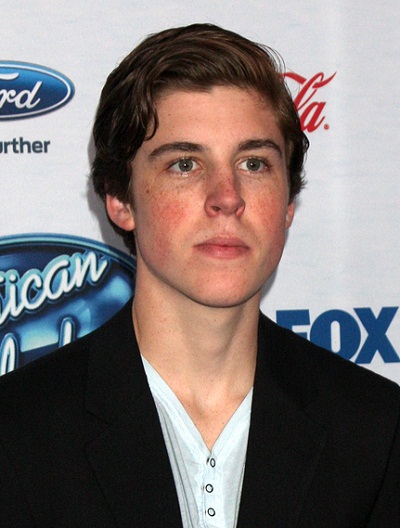 Woolf in 2014, photo by kathclick/Bigstock.com

Sam Woolf is an American singer and songwriter. He was a contestant on season 13 of American Idol.

Sam was raised partly in North Port, Florida. He is a nephew of composer Randall Woolf and pianist Kathleen Supové, by marriage. His great-uncle, Mickey Woolf, was a musician prominent in Detroit’s Jewish community.

Sam’s paternal grandfather is Elroy Woolf (the son of Samuel “Sammy” Woolf and Ann/Anna Hinke). Elroy was born in New Jersey, and raised in Michigan. Sammy Woolf was a prominent Detroit bandleader, and was born in New York, to Russian Jewish parents, Elias Woolf and Lena/Leena Schriber. Ann was the daughter of Anton/Anthony Hinke, who was from Bohemia, and of Minnie/Mina, who was from Germany.

Sam’s paternal grandmother is Jacqueline Miller (the daughter of Joseph “Joe” Miller and Goldie Siegel). Jacqueline was born in Michigan, to Russian Jewish immigrants. Joseph was the son of Max Miller and Molly Shanaky. Goldie was the daughter of Jacob/Yankel Zekel/Siegel and Chava/Eva Chichelnitski/Cheshelnitzky.

Genealogy of Sam’s father (focusing on his own mother’s side) – https://www.geni.com