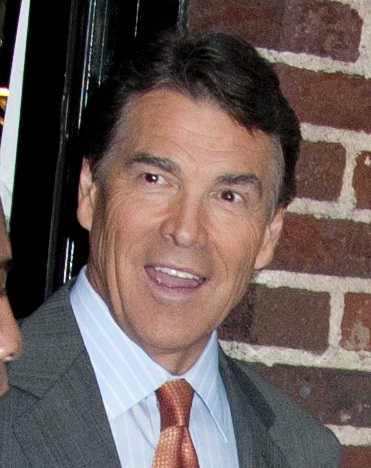 Rick’s family has lived in Texas, and more generally, in the United States, for many generations. He has English ancestry, with smaller amounts of Scottish, Scots-Irish/Northern Irish, and German, roots, and distant French ancestry. He is married to Anita Thigpen Perry, with whom he has two children.

Rick’s paternal grandfather was Hoyt Perry (the son of Wayne Willing/William Perry and Alzara/Elzara Gertrude Hamilton). Hoyt was born in Texas. Wayne was the son of John Michael Perry and Winifred/Winneyfred Catherine Berry. Alzara was the daughter of David Henry Hamilton, a prominent farmer and Members of the Texas House of Representatives, and of Mary Isabella/Isabell Gaston.

Rick’s maternal grandmother was Clara Mena Brite/Bright (the daughter of William Thomas Brite and Maudie/Manevy Caroline Lowery). Clara was born in Texas. William was the son of Thomas Benton Brite and Mary Mahulda Baker. Maudie was the daughter of William Pinkney Logan Lowry and America Emma/Emaline Laura Kuenstler/Kinser/Kuntzer, who was of German descent, with ancestors from Alsace, Saarland, and Palatinate.