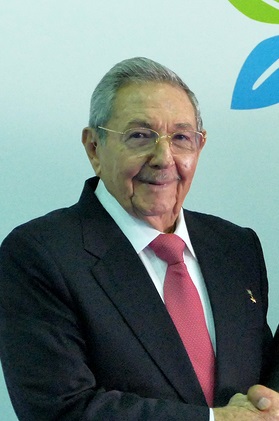 Castro in 2016, photo by Ogi/Bigstock.com

Raúl was married to revolutionary, feminist, and chemical engineer Vilma Espín, until her death. The couple has four children.

Raúl’s patrilineal line traces to Domingo Castro, who was born, c. 1679, in Sarria, Lugo, Spain, and to his wife, Catalina Quiroga.

There are various claims on the internet, of varyingly dubious value, that Raúl has Sephardi Jewish ancestry (specifically, Marrano ancestry, descent from Jews who converted to Catholicism, some of whom retained some Jewish practices). It is possible that Raúl, his brother Fidel, or other relatives, personally stated that they have such ancestry. It does not appear, however, that any documented Jewish ancestry has of yet been produced for Raúl Castro. In any case, much, if not all, of the population of Spain has Jewish ancestry of one degree or another.

Genealogy of Raúl Castro (through his brother, Fidel Castro) – http://www.wargs.com

Genealogy of Raúl Castro (focusing on his father’s side) – http://geneall.net