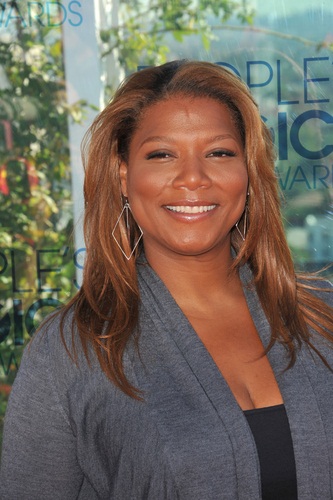 Queen Latifah is an American rapper, singer, songwriter, actress, television host, and producer. Her name, Latifah, is Arabic for “delicate” and “gentle.”

Queen is the daughter of Rita Lamae (Bray) and Lancelot Amos Owens. She was raised Baptist. Her brother, Lancelot Owens, a police officer, died in an accident in 1992.

Both of her parents are black. One of her paternal great-great-grandmothers was white.

Queen Latifah’s paternal great-great-great-grandparents, Francis “Frank” Owens and Lovey Flury/Fleury, were free persons of colour in Princess Anne County, Virginia, during slavery. The show Finding Your Roots, with Henry Louis Gates, Jr. (2020), traced Queen Latifah’s ancestry back to Juggy Owens, a midwife, born c. 1766, who was also a free person of colour. Juggy was born into slavery, and was freed in 1792 by her owner Mary Old. Juggy’s mother’s name was Grace.

Queen Latifah’s paternal grandfather was Amos Owens, Jr. (the son of Amos Owens and Irene Coates). Queen Latifah’s grandfather Amos was born in Essex County, New Jersey. Queen Latifah’s great-grandfather Amos was the son of Thomas Owens and Virginia “Jennie” Jones. Irene was the daughter of Henry Coates, who was black, and of Edna Hallion, who was white, possibly with Irish ancestry. Henry was from Virginia and Edna was from New York. The two married in 1906 and lived in New Jersey, where interracial marriage was never illegal.

I’m black and we think that all of us think have Native American in us, and if I find out I don’t have any Native American in me, I’m gonna be kinda mad about that… I’m pretty sure I have some Blackfoot and Cherokee Indian in me… I’ve got a lot of Russian in me, apparently.