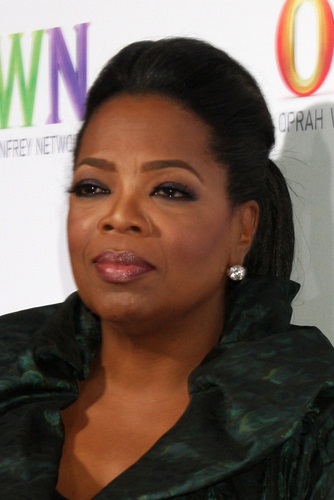 Oprah Winfrey is an American media proprietor, talk show host, actress, producer, and philanthropist. She is regarded as one of the most influential women in the world, and possibly the wealthiest African-American of the 20th century. She was the host of The Oprah Winfrey Show from 1986 to 2011.

Oprah’s parents, Vernon Winfrey and Vernita Lee, are both black. Her partner is author and public speaker Stedman Graham. Her birth name is Orpah, after the biblical figure, in the Book of Ruth. She uses the name Oprah, as people usually mispronounced it that way.

Oprah’s story is a rags-to-riches one. She was born in Kosciusko, Mississippi, to a single teenage mother. She herself became pregnant at the age of fourteen. Unfortunately, her baby died soon after birth. Despite her beginnings, Oprah finished school and received a scholarship into Tennessee State University, where she studied communications. She gave birth prematurely at age fourteen, to a son, Canaan, who died shortly after. At the age of seventeen, Oprah won the Miss Black Tennessee Beauty Pageant.

A DNA test whose results were displayed on the show African American Lives (2006) stated that Oprah’s genetic ancestry is:

“East Asian” may refer to more Native American roots. It is not clear if these lineages have been verified/documented genealogically. The same DNA test stated that Oprah has ancestry from the Kpelle people, from what is now Liberia, the Bamileke people, from Cameroon, and a Bantu-speaking tribe, from Zambia.

Oprah’s paternal grandfather was Elmore Winfrey (the son of Sanford Elias Winfrey and Ella Staples). Elmore was born in Mississippi. Sanford was the son of Constantine Winfrey, who was born a slave, in Georgia, and of Violet A. Nunn, who was also born a slave, in North Carolina. Constantine likely took his surname from a slave owner, Absalom F. Winfrey. Oprah’s great-grandmother Ella was the daughter of William Staples and Abigail Howard.

Oprah’s paternal grandmother was Beatrice Woods (the daughter of Thomas/Tom W. Woods and Hattie Ross). Beatrice was born in Mississippi. Thomas was the son of Monroe Woods and Henrietta. Hattie was the daughter of Simon Ross and Katie.

A farmer named Noah Robinson, Sr. has stated that he is Oprah’s biological father. It is not clear if this claim has been investigated in any detail.

The Guardian article on DNA tests among African-Americans, 2006 – http://www.guardian.co.uk