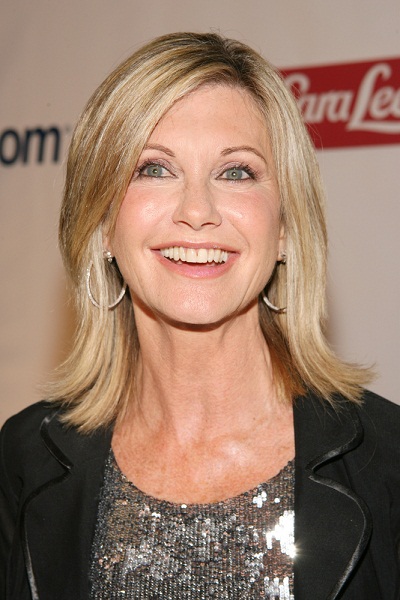 Olivia Newton-John was an Australian singer, songwriter, actress, entrepreneur, and animal rights activist. She starred in the films Grease, Xanadu, Two of a Kind, and It’s My Party, among others.

Olivia was born in Cambridge, Cambridgeshire, England, the daughter of Irene Helene (Born) and Brinley “Bryn” Newton-John, an MI5 officer, who worked on the Enigma project at Bletchley Park. Her maternal grandfather was physicist and mathematician Max Born, who won the 1954 Nobel Prize in Physics. Her family moved to Melbourne, Australia, when she was six.

Her father was Welsh, from Cardiff, and had Welsh and English ancestry. Her mother was born in Germany. Olivia’s maternal grandfather was of Jewish background, while Olivia’s maternal grandmother was born to a father of Jewish descent and a mother of non-Jewish, German, descent. Olivia’s mother’s family left Berlin to escape the Nazi regime. Her mother’s family was Lutheran by religion by the time of Olivia’s mother’s birth. Among Olivia’s Jewish ancestors are German Jews, Polish Jews, and Czech Jews.

Olivia was married to herb company founder John Easterling, until her death. She had a daughter, singer and actress Chloe Lattanzi, with her former husband, actor and dancer Matt Lattanzi. Matt is of Italian and Polish descent.

Olivia was also a third cousin of comedian and actor Ben Elton, through their great-great-grandparents Rabbi Philipp Ehrenberg and Julie Fischel.

Olivia’s maternal grandfather was Max Born (the son of Gustav Jacob Born, a histologist and author, and Margarethe Gretchen Kaufmann/Kauffmann). Max was a German Jew, who was born in Breslau, German Empire, now Wrocław, Poland. As an adult, he was baptized a Lutheran. Gustav was born in Kempen, the son of Dr. Marcus Buttermilch/Born and Fanny Epstein. Olivia’s great-grandmother Margarethe was born in Tannhausen, the daughter of Saloman/Salomon Kaufmann/Kauffmann and Marie Joachimstal/Joachimsthal.

Olivia’s maternal grandmother was Hedwig Martha “Hedi” Ehrenberg (the daughter of Victor Gabriel Ehrenberg, a jurist, and Elise Marie Agathe Helene von Jhering). Victor was a German Jew, born in Wolfenbüttel, who had converted to the Lutheran religion. He was the son of Rabbi Philipp Ehrenberg, who was born in Wolfenbüttel, and of Julie Fischel, who was born in Prague. Olivia’s great-grandmother Elise was of German, non-Jewish background, and was the daughter of Caspar Rudolph Ritter von Jhering, a jurist, from Aurich, Lower Saxony, and of Ida Christina Frölich.