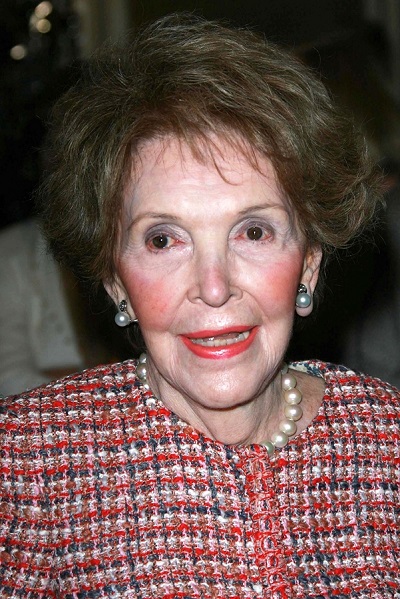 Reagan in 2007, photo by s_bukley/Bigstock.com

Nancy Reagan was an American actress, usually credited under the name Nancy Davis. She was the First Lady of the United States (1981-1989), as the wife of the 40th President of the United States, Ronald Reagan. She was previously First Lady of California (from 1967 to 1975). Ronald and Nancy co-starred in one film together, Hellcats of the Navy (1957), playing love interests. They two children together, radio host and political analyst Ron Reagan and actress and author Patti Davis.

Nancy was the daughter of Kenneth Seymour Robbins, a car salesman, and Edith Luckett, an actress (born Edith Prescott Luckett, also known by her married name, Edith Luckett Davis). She took on the surname of her stepfather, Loyal Edward Davis, a neurosurgeon, becoming known as Nancy Davis in her early years.

Nancy was of English descent. Many of her ancestral lines have been in the U.S. since the 1600s, with her father having been of almost entirely Colonial American (English) descent, from a New England family.

Nancy’s paternal grandfather was John Newell Robbins (the son of Edward N. Robbins and Emily/Emma Barnes). John was born in Great Barrington, Berkshire, Massachusetts. Edward was the son of John Newton Robbins and Elizabeth M. Seymour. Emma was the daughter of James N. Barnes, who was from Vermont, and of Charity, who was from Connecticut.

Nancy’s paternal grandmother was Anne Ayers Francis (the daughter of Frederick Augustus Francis and Jessie Anne Stevens). Nancy’s grandmother Anne was born in Orient, Suffolk, New York, to parents from Pittsfield, Berkshire, Massachusetts. Frederick was the son of Manning Francis and Elizabeth Robbins Root. Jessie was the daughter of Joel Stevens and Jessy/Jessie Ayers, who was English.

Nancy’s maternal grandmother was named Sarah Frances Whitlock (the daughter of Edward F. Whitlock and Martha A.). Sarah was born in Petersburg, Virginia. Edward was born in Dinwiddie County, Virginia, the son of John Whitlock and Sarah.

Nancy Reagan (then Nancy Robbins) on the 1930 U.S. Census – https://familysearch.org