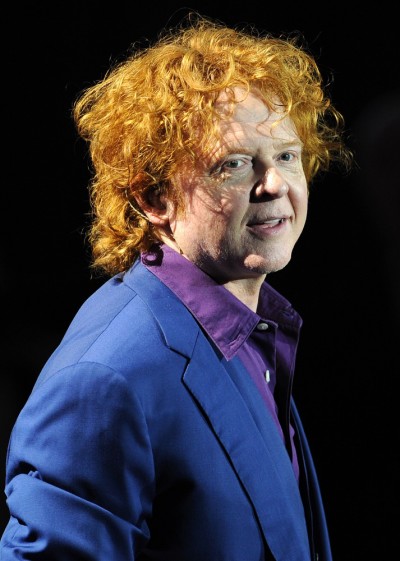 Hucknall in 2009, photo by Prphotos.com

Mick Hucknall is an English singer and songwriter. He is known as a singer for the pop band Simply Red. He is recognisable for his smooth, distinctive voice, and wide vocal range, as well as for his red curly hair.

Mick is the son of Maureen (Gibbons) and Reginald Hucknall. His mother left when he was three, and he was raised by his father. He reconnected with his mother in the mid-1990s, when she was living in Dallas.

Mick is married to Gabriella Wesberry, with whom he has a daughter.

Mick’s paternal grandmother was named Beatrice M. Graham (the daughter of John James Graham and Elizabeth). Beatrice was born in Workington, Cumberland, England. John was the son of William Graham and Jane Fawkes.

Mick has said that his maternal grandmother was Ashkenazi Jewish, although he has made less clear statements on that as well.

Mick has said that a DNA test he took listed him as having “Irish, Basque and Ashkenazi” ancestry, and that he possibly has a “Spanish sea captain” ancestor. He has also said:

In England they do not trust [me] because red hair is a sign that we are coming from the north, Scotland, Ireland, places that England kept wars with. I have a Scottish grandmother and another Irish, but also have DNA from Galicia and northern Portugal. In addition, redheads are different, and English are very conformist, without much charm, practical. Americans have inherited this last feature.