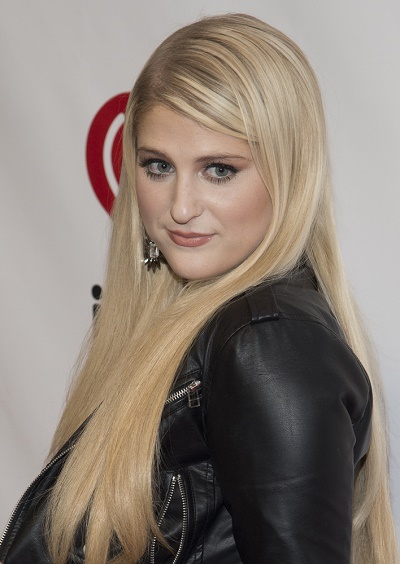 Trainor in 2014, photo by Prphotos.com

Meghan Trainor is an American singer, songwriter, and television personality.

Meghan was born and raised in Nantucket, Massachusetts, the daughter of Gary and Kelly Trainor. She is married to actor Daryl Sabara, with whom she has a son.

Meghan grew up in a musical family, and has been writing songs since she was eleven years old. When she was thirteen, her parents bought her a computer so that she could produce her own songs. The family later moved to Hyannis, Massachusetts, so that Meghan and her brothers could attend Nauset Regional High School in nearby North Eastham.

Meghan’s father has Irish, English, possibly some Scottish, and distant Dutch and German, ancestry. Meghan’s mother is of one half French-Canadian, one quarter Polish, and one quarter Irish, descent; she also has remote English and Guernsey [Channel Islander] ancestry on her French-Canadian side.

Meghan’s paternal grandfather was Kenneth Francis Trainor (the son of Edward J. Trainor and Anastasia Walsh). Kenneth was born in Holyoke, Massachusetts. Edward was a Scottish immigrant, and was the son of Edward Trainor and Mary Ann Nugent. He likely had Irish descent. Anastasia was the daughter of James Walsh and Mary Regan, who were born in Vermont, and were likely also of Irish ancestry.

Meghan’s paternal grandmother was Imion Althea Fuller (the daughter of John Robert Trainor and Ruby Imion Ingham). Meghan’s grandmother Imion was born in Holyoke, Massachusetts. She was of heavily Colonial American (English) descent. John was the son of John Fuller and Charlotte A. Squires. Ruby was the daughter of John Lewis Ingham and Minnie Laura Day.

Meghan’s maternal grandfather is Thomas Ramon Jekanowski, Jr. (the son of Thomas R. Jekanowski and Mary O’Donnell). Meghan’s grandfather Thomas was born in Massachusetts. Meghan’s great-grandfather Thomas was of Polish origin, and was the son of Piotr “Peter” Jekanowski and Valeria/Waleria Lewandoska/Lewandoski. Mary was of entirely or almost entirely Irish descent, and was the daughter of Patrick Sarsfield O’Donnell and Katherine M. Riley.

Meghan’s maternal grandmother is Jeanne Marie LaPalm (the daughter of Joseph Lawrence LaPalm and Jeannette/Jeanette E. Poudrier). Meghan’s grandmother Jeanne was born in Northampton, Hampshire, Massachusetts. Lawrence was the son of Horace Louis LaPalm and Albertine LaPrade, who were the children of French-Canadian parents. Meghan’s great-grandmother Jeannette was also of French-Canadian origin, the daughter of Elzear Joseph Poudrier, whose parents were from Québec, his father from Trois-Rivières; and Corina A. “Corinne” Raymond, whose parents were also born in Canada. Megan’s grandmother’s ancestry also includes remote English and Guernsey [Channel Islander].

Genealogies of Meghan Trainor (focusing on her mother’s side) – http://famouskin.com
http://www.geni.com
http://gw.geneanet.org