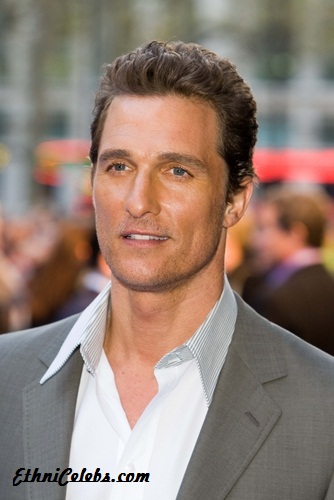 Matthew McConaughey is an American actor, producer, model, writer, and director. He won the Academy Award for Best Actor for Dallas Buyers Club (2013). He has starred in many films, also including A Time to Kill, Amistad, How to Lose a Guy in 10 Days, Ghosts of Girlfriends Past, The Lincoln Lawyer, The Paperboy, Mud, Magic Mike, and Gold, among others. Matthew was selected People Magazine’s “Sexiest Man Alive” in 2005.

Matthew is the son of Mary Kathlene (McCabe) and James Donald McConaughey, who played college football, for the Kentucky Wildcats and the Houston Cougars. His father was born in Mississippi. His mother is from New Jersey. He is married to Brazilian-born model Camilla Alves, with whom he has three children. His brother is television personality Mike ‘Rooster’ McConaughey. His ancestry is Irish, Scottish, one eighth German, English, 1/16th Swedish, and remote Welsh. He has Irish roots in the Cavan/Monaghan area. Matthew’s family moved to Longview, Texas, in 1980.

Matthew’s paternal grandfather was Hugh Richard/Donald McConaughey (the son of James Donald McConaughey and Frances Louise King). Hugh was born in New Mexico, and had Scottish and English ancestry. James was the son of James W. McConaughey and Albina Dandridge McRae. Albina’s brother was Dandridge McRae, a lawyer, court official, and Inspector General of Arkansas State Troops, who was a brigadier general in the C.S.A. during the American Civil War. Albina was a cousin of Democratic politicians Colin J. McRae and John J. McRae, who was Governor of Mississippi. Matthew’s great-grandmother Frances was the daughter of John Patrick King and Sarah H. Hazlett/Harlat.

Matthew’s paternal grandmother was Barbara Claire Maitland (the daughter of Robert Smith Maitland and Julia Barbara Westerling). Matthew’s grandmother Barbara was born in Louisiana. Robert was a Scottish emigrant, born in Aberdeen, the son of Robert Maitland and Jane McDonald. Julia was the daughter of Charles Westerling, a Swedish emigrant, from Gottinbourg, and of Anna Maria Nugent/DeNugent, an Irish immigrant.

Matthew’s maternal grandfather was Walter John McCabe (the son of Walter McCabe and Adele/Adela Selma Pack). Matthew’s grandfather Walter was born in New Jersey. Matthew’s great-grandfather Walter was the son of Charles McCabe and Elizabeth McClure. The surname McCabe can be both Irish and Scottish. Adele was a German emigrant; she was born in Elberfeld, Westphalia, Prussia, the daughter of Wilhelm Gustav Pack and Johanne Friederike Wilhelmine Fasbender.

Genealogy of Matthew McConaughey (focusing on his father’s side) – http://easttexasgenealogy.blogspot.ca

Genealogy of Matthew McConaughey (though only his paternal grandfather is correctly identified) – https://www.geni.com

Matthew’s aunt (his mother’s sister), Barbara I. McCabe, on the 1930 U.S. Census – https://familysearch.org