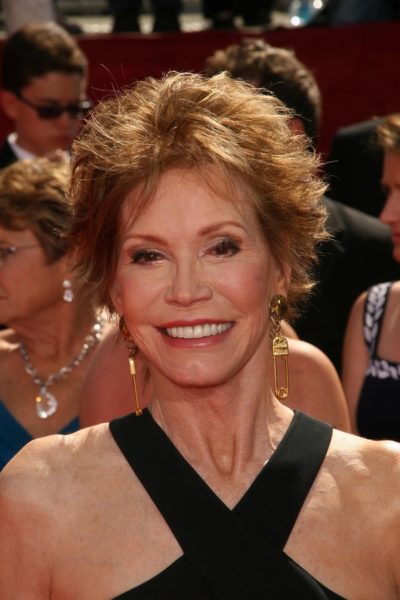 Moore in 2008, photo by s_bukley/Bigstock.com

She was the daughter of Marjorie (Hackett) and George Tyler Moore. Her father was of English, Irish, and German ancestry. Her maternal grandparents were English.

Mary was married to Robert Levine, until her death. She had a son with her former husband Richard Carleton Meeker.

Mary’s patrilineal line can be traced to her great-great-great-grandfather, John Moor, who was born, c. 1755, in Treswell, Nottinghamshire, England.

Mary’s paternal grandfather was George Melville Moore (the son of Lewis Tilghman Moore and Mary E./Fanny/Frances Bragonnier/Bragonier). George was born Virginia, and was of English and German descent. Lewis was the son of John Moore and Mary Catherine Mann or Edith Warren; Lewis owned the house that is now Stonewall Jackson’s Headquarters Museum in Winchester, Virginia. Mary’s great-grandmother Mary was the daughter of The Rev. Daniel George Bragonnier/Bragonier and Mary Elizabeth Shindler.

Mary’s maternal grandfather was Horace Mansell/Mancell Jones/Hackett (the son of Henry Jones/Hackett and Eliza/Elizabeth Charlotte Jane Gutteridge). Horace was born in Islington, London, England. Henry was the son of John Hackett and Sophia Evans. Eliza was the daughter of Mancell Powell Bagshaw Gutteridge and Eliza Levy.

Mary evidently believed that one of her grandfathers was Jewish. No Jewish ancestry appears on family trees of Mary Tyler Moore. Mary’s maternal grandfather, Horace Mansell Hackett, was the grandson of Mancell Powell Bagshaw Gutteridge and Eliza Levy. While the surname Levy is often (but not always) Jewish, Eliza was the daughter of John Levy and Sarah White, who were not of Jewish origin. The family surname had been changed from Lever to Levy, and John Levy was the son of William Lever and Mary Waters.