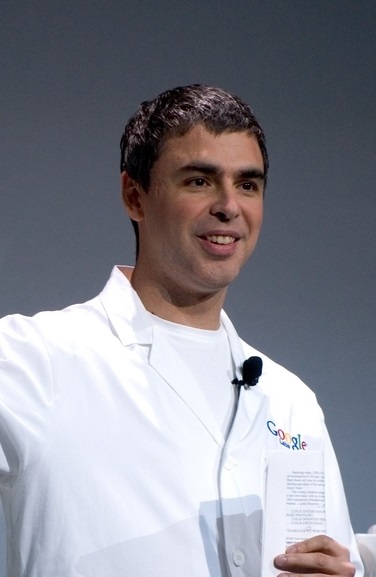 Larry Page is an American computer scientist and Internet entrepreneur. He founded Google with Sergey Brin, in 1998. He has served as CEO of Google and Alphabet Inc., Google’s parent company.

Larry is the son of Gloria (Weinstein) and Carl Victor Page. His father was a professor at the Michigan state university. His mother worked at the Lyman Briggs College under the Michigan State University. Larry’s mother was Jewish. Larry is not religious.

Larry is married to Lucinda Southworth, with whom he has two children. Lucinda is the sister of actress and model Carrie Southworth.

Larry’s paternal grandfather was Carl Davis Page (the son of Henry Horace Page and Annie Drucilla Pardue/Perdue). Carl was born in Tennessee. Henry was the son of John D. Page and Emily Sullivan. Annie was the daughter of Jefferson Davis “Jeff” Pardue and Mary Elizabeth McCaig.

Larry’s paternal grandmother was Pauline Aquilla Chipman (the daughter of James Edward Chipman and Allie May Oxley). Pauline was born in Missouri. James was the son of Joseph H. Chipman and Sarah A. Miller. Allie was the daughter of Aquilla V. Oxley and Mariah Caroline Riddle.

Genealogy of Larry’s paternal great-grandmother, Allie May Oxley (through Allie’s sister) (focusing on her mother’s side) – https://wc.rootsweb.com

Genealogy of Larry’s mother (focusing on her own mother’s side) – https://www.geni.com