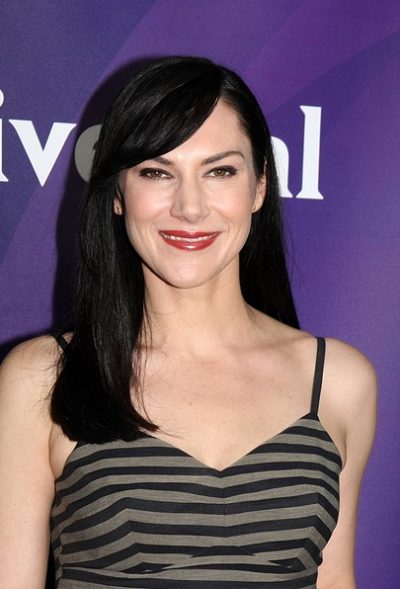 Zagorsky in 2015, photo by kathclick/Bigstock.com

Kyra Zagorsky is an American film and television actress.

She is married to Canadian actor, stunt performer, and drama teacher Patrick Sabongui, with whom she has two children, actors Ashé Sabongui and Bodhi Sabongui. She was raised in Colorado.

Her father is of three quarters Polish and one quarter Lithuanian descent. Her mother is Jewish; three of Kyra’s mother’s grandparents were Ashkenazi Jews, while Kyra’s mother’s maternal grandfather was of Dutch descent, and was almost certainly a convert to Judaism.

Kyra’s paternal grandmother was Constance F. “Connie” Volinsky/Volensky (the daughter of Frank Volinsky/Walutkiewicz and Rosalia “Rose” Slavinski). Constance was born in Pennsylvania. Frank was born in Tolkuny, Smolensk, Russia, the son of Jos Walutkiewicz and Susan Furtonovicz. He was listed as a Polish speaker on the 1920 U.S. Census. Rosalia was born in Pennsylvania, to parents from Lithuania, Jonas “John” Slavinski/Slavinskas/Slavinskienė and Viktorija “Victoria” Leskauskas/Laskauckas/Leskauskaitė.

Kyra’s maternal grandmother was Ann Waller (the daughter of Antonius/Albert Waller and Tzivia “Celia” Trotsky/Trotskaya/Travers). Ann was born in Amsterdam, the Netherlands, and was raised Jewish. Kyra’s great-grandfather Antonius was born in Hof van Delft, the Netherlands, the son of Adriaan Hendrik Waller and Maria Anna Smeelen. Antonius almost certainly converted to Judaism (he is buried with a Star of David on his grave). Kyra’s great-grandmother Tzivia was born in Vilnius, Lithuania, to Jewish parents, Isaac Trotsky/Travers and Hannah Lieberman.

Genealogy of Kyra Zagorsky (focusing on her mother’s side) – http://www.geni.com

Information on the Waller family – http://waller.nl