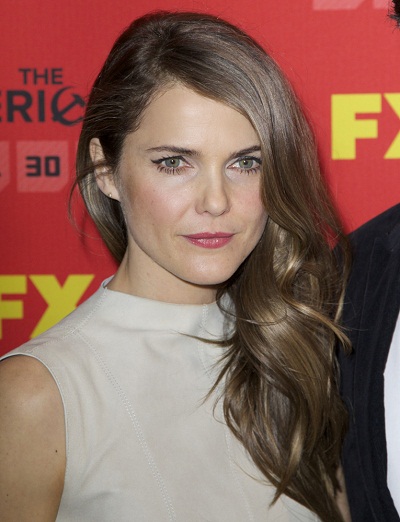 Russell in 2013, photo by Prphotos

Keri Russell is an American actress and dancer.

Much of her ancestry is English, with smaller (to varying degrees) amounts of German, Swiss-German, Scots-Irish/Northern Irish, Manx (Isle of Man), Dutch, and Danish. Many of her ancestral lines trace back to New England of the 1600s, and to England before that.

Keri has a son with her partner, Welsh actor Matthew Rhys, and two children with her former husband, carpenter Shane Deary.

Keri once stated, “I had all my Jewish grandmothers calling.” The reference was evidently humorous (with “all” her “Jewish grandmothers” referring to worried friends). Keri has no Jewish ancestry, and her religious background is LDS (Mormon), with many Utah-born ancestors.

Keri’s maternal grandfather was Kermit Sylvester Stephens (the son of George Walter Stephens and Harriett/Harriet Ann/Anna Colvin). Kermit was born in Arizona. George was the son of William Adam Stephens and Temperance Susan Penrod. Harriett was the daughter of William Wesley Colvin and Elizabeth Jane Winsby, who was English.

Keri’s maternal grandmother was Emma Inez Fish (the daughter of Karl Joseph Fish and Mary Emma McNeil). Emma was born in Arizona. Karl was the son of John Lazelle Fish and Melvina Cheney. Mary Emma was the daughter of Daniel/Dan McNeil and Emma Angenette Hendrix/Hendries.

Keri’s matrilineal line can be traced back to Erasma or Theresia Guillam, who was born c. 1783.

Genealogy of Keri Russell (focusing on her mother’s side) – http://famouskin.com

Genealogy of Keri’s maternal great-grandmother, Harriett/Harriet Ann/Anna Colvin (focusing on her own father’s side) – http://worldconnect.rootsweb.ancestry.com

Genealogy of Keri’s maternal great-great-grandmother, Emma Angenette Hendrix/Hendries (focusing on her own mother’s side) – http://worldconnect.rootsweb.ancestry.com