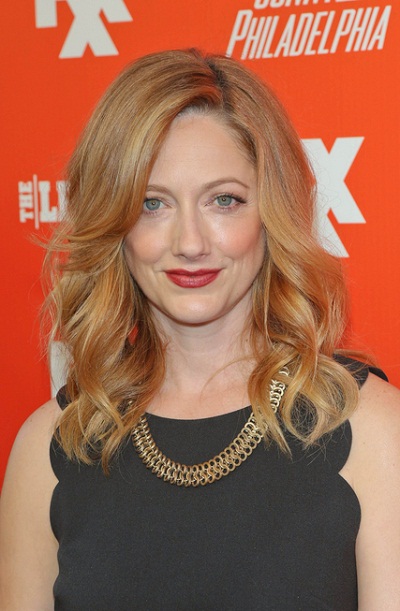 Judy Greer is an American actress, voice actress, comedian, and director. Her roles include 27 Dresses, The Descendants, and Wilson, among many other films and series.

Her mother is a former nun.

Judy’s paternal grandfather was William Franklin “Frank” Evans (the son of Richard Luther Evans and Mary T. Curran). William was born in Des Moines, Iowa. Richard was the son of Morgan Henry Evans, whose parents were Welsh, and of Helen Gertrude Jones, whose father was born in New York, and whose mother was an English immigrant. Mary was the daughter of Irish immigrants, James Curran and Johanna Holihan.

Judy’s paternal grandmother is Beverly Christine Sjeklocha (the daughter of Luka/Louis/Lewis Sjeklocha and Anna Josephine Domonoski). Beverly was born in Boone Township, Iowa, to a Montenegrin father and a Polish mother.

Judy’s maternal grandfather was John Adam Greer (the son of Guy Eugene Greer and Lucy Mary Vetter). John was born in Big Spring Township, Ohio. Guy was the son of John Greer and Mary Ann Crooks, who had deep roots in the U.S. Lucy was the daughter of German parents, Adam P. Vetter and Barbara Getzinger, from Queidersbach, Bavaria.

Judy’s maternal grandmother was Elizabeth Harriet Myers (the daughter of John Theodore Myers and Della Lenora McGuire). Elizabeth was born in Ohio. John was the son of Theodore Myers and Frances Fetters, who were German emigrants, from Baden. Della was the daughter of John McGuire, whose father was Irish, and whose mother was German, and of Marcia Augusta Chambers, who had deep roots in the U.S.

Sources: Genealogy of Judy Greer (focusing on her mother’s side) – https://www.geni.com