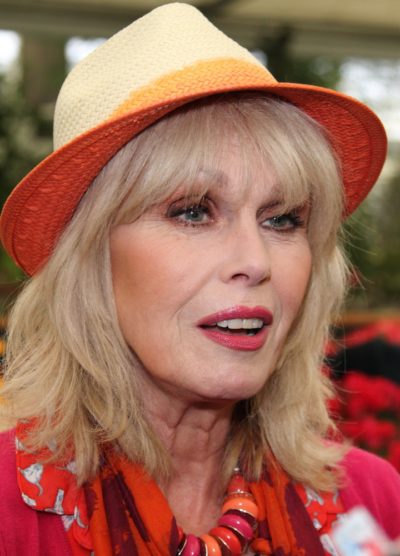 Joanna Lumley is a British actress, model, author, and activist. She is known for her working partnership with Jennifer Saunders.

She was born in Srinagar, Kashmir and Jammu, British India, and was raised in England after India gained independence in 1949. She is the daughter of Thya Beatrice Rose (Weir) and James Rutherford Lumley, who was born in Lahore.

Some of her recent ancestors were born in India. Her father had Scottish, Northern Irish, and English ancestry. Her mother was of approximately one half Scottish, one quarter Danish, and one quarter English, descent.

Joanna is married to conductor Stephen Barlow. She has a son with her former partner, photographer Michael Claydon.

Joanna’s paternal grandfather was Charles Chester Lumley (the son of William Faithfull Lumley and Rosa Maddy). Charles was born in Chelmsford, Essex, England. William was a curate/chaplain, who was born in Calcutta, India, the son of James Rutherford Lumley, who was born in Fort William, Calcutta, and of Clara Letitia Faithfull, who was born in Sullenpore Onde, East Indies, or Bengal. Rosa was the daughter of Joseph Maddy and Louisa Brook Taylor.

Joanna’s maternal grandfather was James Leslie Rose Weir (the son of Patrick Alexander Weir and Alice Mary Reid). James was born in Ghazipur, India, to Scottish parents. Patrick was born in Moray, the son of James Weir and Joanna Rose Calder. Alice was born in Milton, Scotland, the daughter of John Christie Reid and Alexandrina/Alexa Calder.