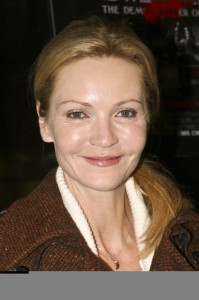 Joan Allen is an American actress. She is known for her roles in the films Nixon (1995), The Contender (2000), The Upside of Anger, Face/Off, and Room, among many others.

Joan is the daughter of Dorothea Marie and James Jefferson Allen. She has a daughter with her former husband, actor Peter Friedman.

Joan’s paternal grandmother was Nancy Ann Bennett (the daughter of Michael Smith Bennett and Rosa Roberts). Nancy was born in Missouri. Michael was the son of Andrew Jackson Bennett and Nancy Denham.

Joan’s maternal grandfather was Henry Wirth (the daughter of Christian Wirth and Marg Kochler). Henry was born in Illinois, to German parents.

Joan’s maternal grandmother was Louise Mary Mazurczak (the daughter of Martin Mazurczak and Anna Magdalena Margareta Wiegers). Louise was German. As he had the surname Mazurczak, Joan’s maternal great-grandfather may have had some Polish ancestry.