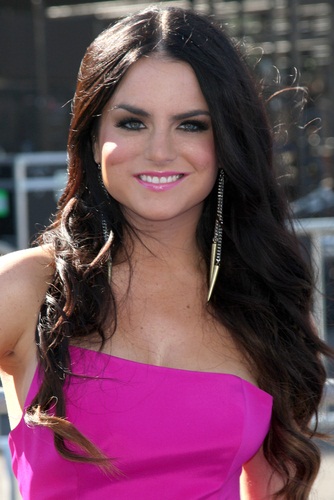 JoJo, also credited as Joanna Levesque, is an American singer, songwriter, and actress. She is known for her roles in the films Aquamarine and RV.

JoJo’s paternal grandfather was Maurice Henri/Henry Levesque (the son of Louis J. Levesque and Wilhelmina/Wilhelmine/Wilhemine D. Cote). Maurice was born in New Hampshire. Louis was French-Canadian, the son of Martial Levesque, from Kamouraska, Québec, and of Thecle/Thadi Dufour, from L’Islet, Québec. Wilhelmina was born in New Hampshire, the daughter of Antoine Cóté, from Les Basques, Québec, and of Victoria Gagnon, from Témiscouata, Québec, Canada.

JoJo’s paternal grandmother was Irene Marion Fortier (the daughter of John Jermiah/I. Fortier and Marion/Mary/Marianne Delia Bedard). Irene was born in Pelham, New Hampshire. John was born in Massachusetts, of French-Canadian descent, and was the son of Joseph F. Fortier and Mary. Marion was French-Canadian, and was the daughter of William Bedard and Lyhdia.

JoJo’s maternal grandfather was Eugene Thomas Blagden (the son of William Albert Thomas Blagden and Irene Elizabeth Cahill). JoJo’s grandfather Eugene was born in Roxbury, Massachusetts. William was born in Maine, the son of Thomas B. Blagden and Martha/Maud J. Henderson. Irene was the daughter of Eugene F. Cahill, who was Irish, and of Jennie/Geneva E. Donovan, who was of Irish descent.

JoJo’s maternal grandmother was Sonja J. Granskie (the daughter of Henry Joseph Granskie and Helen J. Rutniski). Sonja was born in Massachusetts, and was of Polish descent.