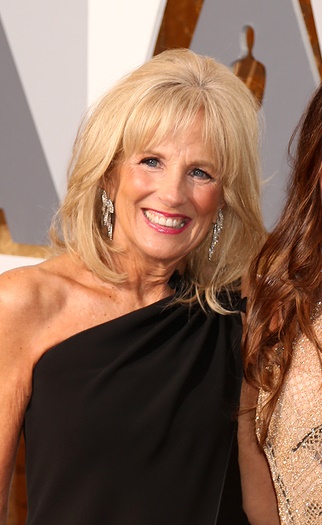 Biden in 2016, photo by kathclick/Bigstock.com

Jill was born in Hammonton, New Jersey, the daughter of Bonny Jean (Godfrey) and Donald Carl Jacobs, and was raised in Willow Grove, Pennsylvania. Jill and Joe have a daughter together, social worker, activist, and philanthropist Ashley Biden.

Being of one quarter Italian/Sicilian descent, Jill is the first person of significant Italian ancestry to be married to a person who is either a President or Vice President of the United States.

My grandpop was Dominic Giacoppa, but they changed it to Jacobs. So I grew up eating one Italian meal on Sunday, with the wedding soup and the braciole and homemade pasta.

Jill’s paternal grandfather was Domenic/Domenico/Dominic/Dominick J. Giacoppa/Giacoppo/Giocoppo/Jacobs (the son of Gaetano “Guy” Giacoppa/Giocoppo/Jacobs and Concetta “Jennie” Scaltrito/Squatrito). Domenic was born in Hammonton, Atlantic, New Jersey, to parents from Messina, Sicily. Gaetano was born in Castanea delle Furie, the son of Sebastiano Giacoppo and Francesca Celi. Concetta was born in Gesso, the daughter of Francesco Scaltrito and Maria Bruno.

Jill’s paternal grandmother was Mable/Mabel Sarah Blazer (the daughter of William G. Blazer and Louise/Louisa Paulina Roller). Mable was born in New Jersey, and all of her grandparents were German. William was the son of Jacob Blazer and Christiana Grebe. Louise was the daughter of Jacob Roller and Sarah Spesce.

Jill’s maternal grandfather was Harold Godfrey (the son of Harold Godfrey and Lizzie/Elizabeth S. Godfrey). Jill’s grandfather Harold was born in Ocean View, Cape May, New Jersey. Jill’s great-grandfather Harold was the son of Jesse Somers Godfrey and Emily Cameron Van Gilder/Vangilder. Elizabeth was the daughter of Reuben Somer Godfrey and LaDora/Dora T. Layton. Jill’s great-great-grandmother Emily had partial Dutch and French Huguenot ancestry. She was descended from Daniel Perrin, a French man from Normandy, who was one of the first permanent European inhabitants of Staten Island, New York.

Genealogy of Jill’s maternal great-grandfather, Harold Godfrey (focusing on his own mother’s side) – http://www.findagrave.com