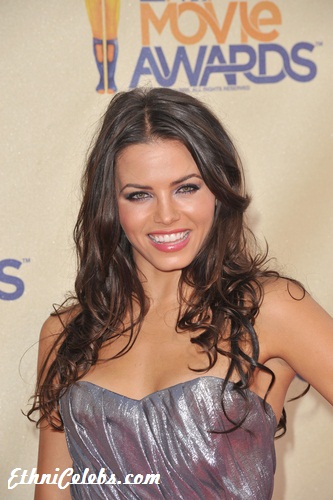 Dewan-Tatum in 2009, image via Featureflash / Shutterstock.com

Jenna Dewan-Tatum, previously credited as Jenna Dewan, is an American actress, producer, dancer, and model. She is known for her leading roles in the films Step Up and Tamara. Jenna has a daughter with her former husband, actor and dancer Channing Tatum, and a son with her fiancé, actor and singer Steve Kazee.

Jenna’s father is of half Lebanese and half Polish descent. Jenna’s mother has German, English, and Cornish ancestry.

Jenna’s paternal grandfather was Emil Dewan (the son of Elias/Eli Abdo Dewan and Marie Bardwell). Emil was born in Massachusetts, to Lebanese parents.

Jenna’s paternal grandmother was Evelyn Ziemba (the daughter of Ignatius/Ignacy Franciszek Ziemba and Katarzyna/Katherine/Catherine Gruszka). Evelyn was born in Massachusetts, to Polish parents, her father from Kalembina and her mother from Dębica. Katarzyna was the daughter of John/Jan Gruszka and Maryanna.

Jenna’s maternal grandfather was Donald Dudley Bursch (the son of Donald Skidmore Bursch and Mary Louise Bamman). Jenna’s great-grandfather Donald was the son of Daniel Fredrick Wilhelm Bursch, who was born in New York, to German parents, his father from Hamelin, Lower Saxony and his mother from Twistringen, Lower Saxony, and of Ida T. Gabie. Mary Louise was the daughter of Martin J. Bamman and Frances Elizabeth/L. Davis.

Jenna’s maternal grandmother was Elizabeth Anne/Ann Wheeler (the daughter of Joseph Edward Wheeler and Bertha Mary Bray). Elizabeth was born in Barahona, the Dominican Republic. Joseph was the son of Edward Francis Wheeler and Clarissa Anna Goar. Bertha was the daughter of Oscar Simon Bray, who was born in New Jersey, to Cornish parents, and of Bertha Matilda “Maggie” Janner, who was German, from Ratzeburg.

Interview where Jenna talks about her background – http://channingtatumunwrapped.com