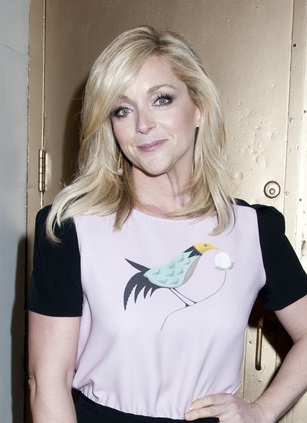 Krakowski in 2013, photo by Prphotos.com

Jane Krakowski is an American actress and singer. Her father was of Polish descent. Her maternal grandfather was of half French-Canadian and half Scottish ancestry.

She has a son with her former fiancé, British menswear designer Robert Godley.

Jane’s maternal grandfather was Triffle Michael Benoit (the son of Joseph Osias Harmisdas Benoit and Mary Dugan). Triffle was born in New York, to a French-Canadian father and a Scottish mother. Harmisdas was raised in St-Paul, Abbotsford, Rouville, Québec, Canada, the son of Joseph Trefflé Benoît and Philomine/Philomene Bernard. Mary was the daughter of John Dugan and Mary.