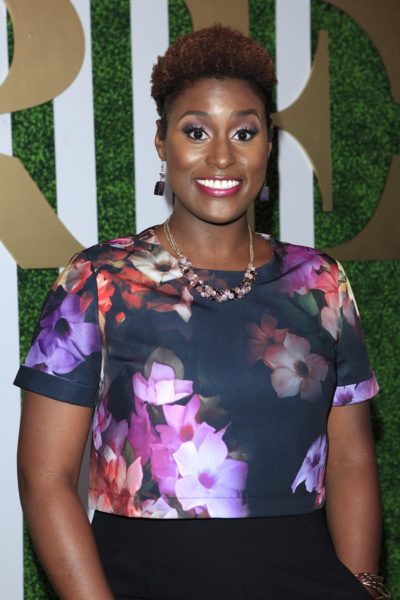 Rae in 2015, photo by kathclick/www.bigstockphoto.com/

Issa Rae is an American actress, writer, director, producer, and web series creator. She is known as the creator of web series Awkward Black Girl, and a star of the films Little and The Photograph.

Issa is the daughter of Delyna Marie (Hayward) and Abdoulaye Diop. Issa’s father is from Senegal. Issa’s mother is American, born in New Orleans, Louisiana, and is of African-American, Creole [African, French, distant Spanish], and distant French-Haitian, descent. Issa was raised in California, Maryland, and Dakar, Senegal. Issa is married to Senegalese businessperson Louis Diame.

Her name, Jo-Issa, is a combination of her grandmothers’ names, Joyce and Isseu. Her middle name Rae is after an artist aunt.

A DNA test whose results were displayed on the show Finding Your Roots with Henry Louis Gates, Jr. (2021) stated that Issa’s genetic ancestry is:

Issa’s paternal grandfather was named Amadou Diop (the son of Yoro “Tapa” Diop). Amadou was born in Senegal. Issa’s great-grandfather Yoro was conscripted by the French from Senegal to fight in World War I, and was killed in action in France in 1917. He received a French military medal for bravery.

Issa’s maternal grandmother was Joyce Marquer Charbonnet (the daughter of Joseph Louis Charbonnet and Odette Mary Clayton). Joyce was born in New Orleans, Orleans, Louisiana. Joseph was the son of Louis Charbonnet and Victoria Morales/Moralez. The Charbonnet family were free people of color. Louis’ paternal grandfather, Amable Barthélémy Charbonnet, was white, and was born at Jérémie, on St. Domingue, now Haiti. Louis’ paternal grandmother, Marie Louise Mélite, was born in to slavery and freed along with her mother Mary by her own father, Jean Louis Beaulieu, a free man of color who owned them; in 1816. Issa’s great-grandmother Odette was the daughter of Thomas Clayton and Julia.