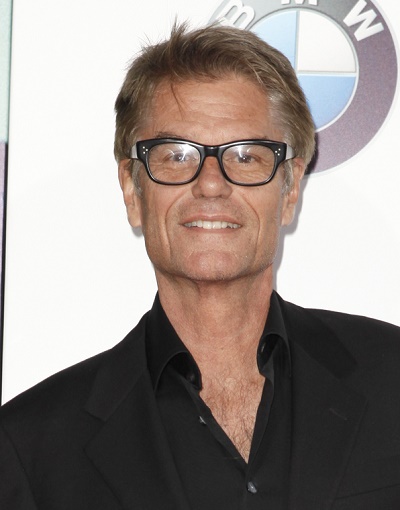 Harry Hamlin is an American actor, author, and entrepreneur. He has starred in Clash of the Titans, Making Love, and L.A. Law, among other works.

He is the son of Berniece/Bernice (Robinson), a socialite, and Chauncey Jerome Hamlin, Jr., an aeronautical engineer. Harry is married to actress Lisa Rinna. He has a son with his former partner, actress and model Ursula Andress; and two children with Lisa.

Harry’s patrilineal line can be traced to James Hamlin, who was born, c. 1636, in Reading, Berkshire, England.

Harry’s paternal grandfather was Chauncey Jerome Hamlin (the son of Harry Hamlin and Grace Enos). Chauncey was born in New York. Harry’s great-grandfather Harry was the son of Cicero Jabez/Julius Hamlin and Susan Jane Ford. Grace was the daughter of Laurens Enos and Mary King.

Harry’s paternal grandmother was Emily Ann/Gayle Gray (the daughter of David Gray and Martha Terry Guthrie). Emily was born in New York. David was born in Midlothian, Scotland, the son of Philip Cadell Gray and Amelia Tasker. Martha was the daughter of Sheldon Guthrie and Emily Ann Terry.

Harry’s maternal grandfather was Clarence Asher/Arber Robinson (the son of Alva Andrew Robinson and Ellen McFall). Clarence was born in Michigan. Alva was the son of Seth Robinson and Polly Nowland.

Harry’s maternal grandmother was Anna F. West (the daughter of George W. West and Emma R. Johnson). Anna was born in Nebraska. George was the son of James West and Rachel Ann Davis. Emma was the daughter of Levi Johnson and Julia Ann Crandall.

Sources: Genealogies of Harry Hamlin (focusing on his father’s side) – http://worldconnect.rootsweb.ancestry.com
https://www.geni.com

Genealogy of Harry’s father (focusing on his own mother’s side) – http://worldconnect.rootsweb.ancestry.com