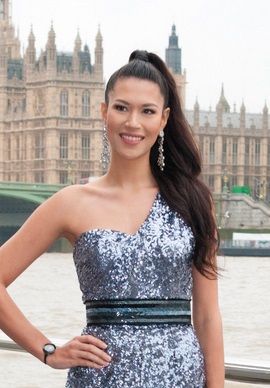 Gwendoline Ruais is a French-Filipina beauty queen, fashion model, actress, and television presenter. She represented the Philippines in the Miss World 2011, in which she was placed first runner-up.

Her father, Vincent Ruais, is French, with roots in Brittany, including Keremma. Her mother, Maria Lourdes “Malou” Ramos, is a Filipina model. Her sister is beauty queen Gwennaelle Ruais.

Gwendoline’s paternal grandfather was Pierre Ruais (Pierre Adolphe Emile Ruais, the son of Edmond Louis Armand Ruais and Marie Marguerite Mathilde Tournois). Pierre was born in Nancy, Meurthe-et-Moselle, Lorraine, France, and was a politician, who was Mayor of Paris, from 1956 to 1957, and a member of the National Assembly for the Paris 28th constituency, from December 9, 1958 to April 1, 1973. Edmond was the son of Guillaume Adolphe Ruais and Maria Marguerite Adolphine Froger. Gwendoline’s great-grandmother Marie Marguerite was the daughter of Pierre Emile Tournois and Marie Virginie Henriette Valentine Millot.