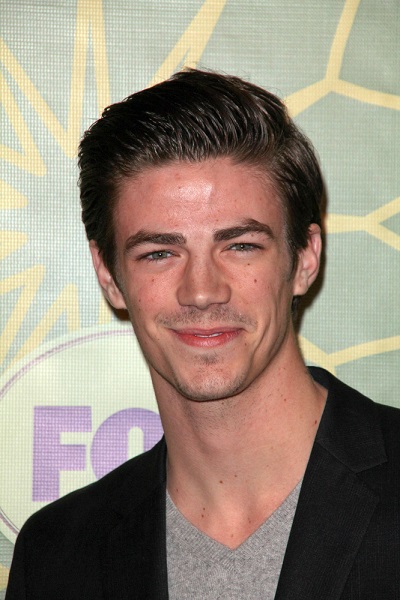 Grant Gustin is an American actor and singer. He stars as Barry Allen in the 2010s The Flash series.

He is the son of Tina, a nurse, and Thomas Gustin, a college professor. Many of his family lines have been in the United States for many generations, since the 1600s. Grant is married to Andrea “LA” Thoma, who is of Malaysian origin. The couple has a daughter.

Grant’s patrilineal line can be traced to his eight times great-grandfather, Augustine Jean Gustin, who was born, c. 1647, in Jersey, Channel Islands.

Grant’s paternal grandfather is Harry Nelson Gustin II (the son of Earle/Earl Frank/Francis Gustin and Eddie Mae Avery). Harry was born in Woodstock, Ontario, Canada, to a Canadian-born father and an American-born mother, from North Carolina. Earle was the son of Henry/Harry Nelson Gustin and Alice T. Frawly. Eddie was the daughter of Freeman Avery and Cordelia S. “Delia” Waters.

Grant’s paternal grandmother was Esther Grace Callaham (the daughter of James Wilson Callaham and Rose Elizabeth Keetch/Keech). Esther was born in Virginia. James was the son of Charles Merriman Callaham and Victoria C. Madoney. Rose was born in Ohio, to an English father, George John Keech/Keetch, and an Australian mother, Josie Jane Pedmore.

Grant’s maternal grandfather was Charles Leslie “Les” Sweeney (the son of William Robert Sweeney and Margaret “Maggie” Annette “Nettie” Purgold/Pergold). Charles was born in Virginia. William was the son of James Monroe Sweeney and Margaret. Grant’s great-grandmother Margaret Purgold was the daughter of Edward Frederich/Frederick “Eddie” Purgold, who was of German descent, and of Margaret Anne “Maggie” Mills.

Grant’s maternal grandmother was Edna Earle Jenkins (the daughter of Samuel Robert Jenkins and Lola Dawn Brooks). Edna was born in Virginia. Samuel was the son of Joseph/James A. Jenkins and Susan C. Jones. Lola was the daughter of W. T. Brooks.