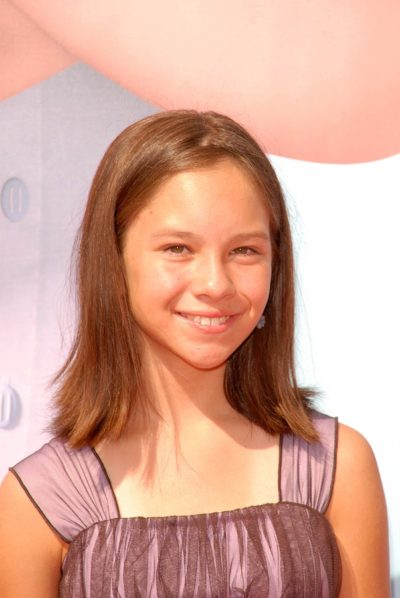 Grace Rolek at the Los Angeles Premiere of ‘Cloudy With A Chance of Meatballs’. Mann Village Theatre, Westwood, CA. 09-12-09 Photo by s_bukley/Bigstock.com

Grace Rolek is an American actress, voice actress, and singer. She is known for voicing Connie in the Steven Universe productions. A picture of her parents can be seen here.

My mom is Japanese and black & my dad is white. Be that as it may, I know that I’m deeefinitely white passing.

My dad is half polish and half Italian. :-)

Grace’s maternal grandfather was James Autry/Archie “Jimmy” Robinson (the son of Felix Robinson and Jamie/Jimmie Curry/Currie). James was born in California, and was listed as “Negro” on his marriage record.

Grace’s maternal grandmother was Margo Maruko/Mariko “Mary” Inouye (the daughter of Ted Tetsumi Inouye and Seiko/Seike Sasaki). Mary was born in California. Ted was born in Washington, to Japanese parents, Kameki Inouye and Tokuji Komatsu. Seiko was born in Washington, also to Japanese parents, Sokei-an (Yeita Sokei-an Sasaki) and Tomé. Sokei-an was a prominent Rinzai monk, who founded the Buddhist Society of America, and was known in Zen Buddhism circles.