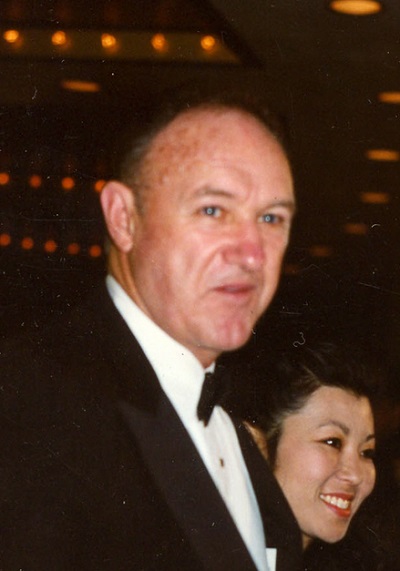 Hackman with wife Betsy Arakawa in 1990, photo by Prphotos

Gene is the son of Ann Lydia Elizabeth (Gray) and Eugene Ezra Hackman. His father was American and his mother was Canadian, born in Lambton County, Ontario, Canada. His paternal great-grandfather was from a Pennsylvania Dutch (German) background. Much of the rest of his ancestry is English, with some Scottish, and distant Dutch.

Gene is married to Betsy Arakawa. He has three children with his former wife, Faye Maltese.

Gene’s paternal grandfather was William Henry Hackman (the son of Ezra T. Hackman and Amelia Ann Childs). William was born in Illinois. Ezra was the son of Jacob Hackman and Rebecca Margaret Staman/Stamm/Staman, who had had German ancestry. Amelia was the daughter of James Mitchell Childs and Arena/Arrena Huff.