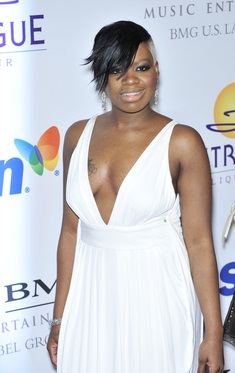 Fantasia, also known as Fantasia Barrino, is an American R&B singer, songwriter, and actress. She won the third season of the show American Idol (in 2004). See other American Idol winners here.

Her uncles, The Barrino Brothers, were a 1970s soul music group.

Fantasia’s parents, Diane and Joseph Barrino, are both African-American. She is married to businessperson Kendall Taylor. She has three children, including a daughter with Kendall.

African-Americans with the surname Barrino have lived in North Carolina since at least the mid 1800s, and usually came from South Carolina before that. It appears that the surname was originally Barrineau. Speculation that the family has some degree of Hispanic (specifically Cuban) ancestry is not accurate.

Fantasia’s paternal grandfather was Curtis Barrino (the son of Jesse/Jessie Barrino and Juanita McKeythan/McKether). Curtis was born in North Carolina. Juanita was the daughter of Curtis McKeythan and Faye Thomas.

Fantasia’s paternal grandmother was Madie Medley (the daughter of Robert Medley and Ellen Chambers). Madie was born in North Carolina.