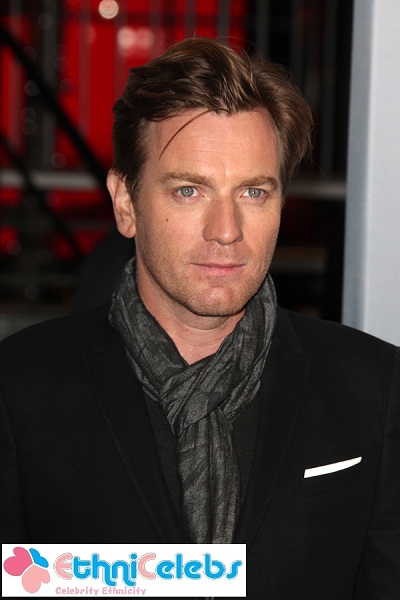 McGregor in 2012, image via kathclick/Bigstock.com

Ethnicity: Scottish, as well as one sixteenth German

Ewan McGregor is a Scottish actor and director. His roles include Moulin Rouge!, Black Hawk Down, Big Fish, The Ghost Writer, Christopher Robin, Trainspotting, Star Wars, and Doctor Sleep, among many other films, and television’s Halston.

Ewan is the son of Carol Diane, a teacher, and James Charles Stewart “Jim” McGregor, a teacher and careers master. Ewan’s uncle is actor and director Dennis Lawson. Ewan has four children, including model Clara McGregor, with his former wife, production designer Eva Mavrakis; and a son with his partner, American actress and singer Mary Elizabeth Winstead.

Ewan’s paternal grandmother was Isabella McMillan Clark McIndoe (the daughter of Juan/John Charles McIndoe and Mary Forrester Clark). Juan was born in Chile, to a Scottish father, Robert McIndoe, who was an engineer assisting with the construction of railways there; and of Wilhelmina Landmann/Kraus, who was likely of German ancestry. Mary Forrester was born in Lanarksh, Scotland, the daughter of George W. Clark and Isabella McMillan.

I’m not a religious person… I’m married to a Jewish woman [then-wife Eva Mavrakis], so my children are Jewish and my involvement in religion has more to do with the Jewish faith now and not the Christian faith, which I was very vaguely brought up in… My parents were not religious, but my school had prayers at morning assembly… So my early understanding of religion was the Protestant faith in Scotland. But my experience is no longer that.

Eva Mavrakis was raised in France, and is of Greek-Sephardi Jewish ancestry. Ewan’s daughters had Bat Mitzvah ceremonies.

More information about Ewan’s family’s religion can be read here.