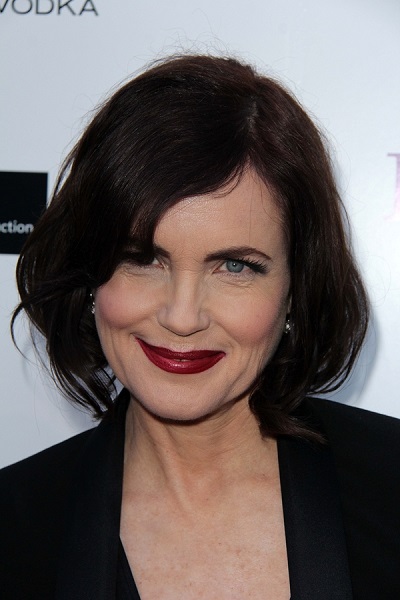 McGovern in 2013, photo by s_bukley/Bigstock.com

Elizabeth McGovern is an American actress and musician. She is the daughter of Katharine Wolcott (Watts), a high school teacher, and William Montgomery McGovern, Jr., a university professor. Her sister is novelist Cammie McGovern. Elizabeth is married to director and producer Simon Curtis, with whom she has two children.

Elizabeth’s maternal grandfather was Ethelbert Watts, Jr. (the son of Ethelbert Watts, a diplomat, and of Katharine Lorenz Gregg). Elizabeth’s grandfather Ethelbert was born in Prague, Czech Republic, to American parents. Elizabeth’s great-grandfather Ethelbert was the son of Henry Miller Watts, a lawyer, politician, and diplomat, who was U.S. Minister to Austria-Hungary, from September 25, 1868 to June 1, 1869; and of Anna Maria Schoenberger, whose father founded the Shoenberger Steel Company. Anna Maria was of German descent. Henry’s brother, Elizabeth’s great-great-great-uncle Frederick Watts, was U.S. Commissioner of Agriculture, from 1871 to 1877.

Elizabeth’s maternal grandmother was Elizabeth Lee Snyder (the daughter of Charles Philip Snyder, an admiral, and of Cornelia Lee Wolcott). Charles P. Snyder was the son of Charles P. Snyder (Charles Philip Snyder), a Democratic U.S. congressman from West Virginia, from 1883 to 1889; and of Jane Adelia Goshorn. Cornelia was the daughter of Christopher Columbus Wolcott and Elizabeth Westward McRae.

Genealogy of Elizabeth McGovern (focusing on her father’s side) – http://worldconnect.rootsweb.ancestry.com