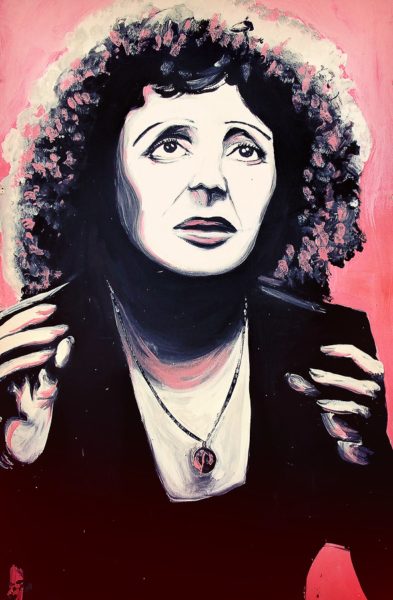 graffiti portrait of Édith Piaf in Sète, France, in 2014, photo by Photoprofi30/Bigstock.com

Édith Piaf was a French cabaret singer, songwriter, and actress.

Édith’s father, Louis Alphonse Gassion, was an acrobat, contortionist, and circus performer. Édith’s mother, Annetta Giovanna Margherita (Maillard), was a café singer, with the stage name Line Marsa. Her father was from Falaise, Normandy, France, and was of French descent. Her mother, who was born in Livorno, Tuscany, Italy, was of one half French, one quarter Moroccan (usually described as Berber), and one quarter Italian, ancestry. Édith is sometimes described as having had Algerian Kabyle roots from her Moroccan line. It is not clear if this is accurate.

Édith had a daughter. Édith was married to Greek hairdresser, singer, and actor Théo Sarapo, until her death.

Édith’s paternal grandfather was Victor Alphonse Gassion (the son of Pierre François Gassion and Augustine Duval). Victor was born in Falaise, Calvados, Lower Normandy, France, and was a horseman in the circus.