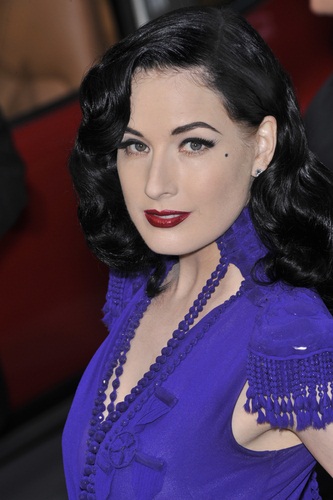 Dita Von Teese is an American vedette, burlesque dancer, model, and businessperson. She is nicknamed “Queen of Burlesque,” and has been credited for burlesque culture’s return to prominence in the late 2000s.

She is the daughter of Bonnie, a manicurist, and Ken Sweet, a machinist. She was raised partly in Orange, California.

My [maternal] grandmother was 1/2 Armenien. But I’m also English+Scottish+German=American!

Dita’s paternal grandfather was Everett Wilson Sweet (the son of Wesley Ross Sweet and Ivy Lily May Glazier). Everett was born in Campbellford, Canada. Wesley was the son of John Wesley Sweet and Agnes Saphrona Hubble, and had deep roots in Canada and then the U.S. Ivy was an English emigrant, from London, and was the daughter of Henry/Harry Glazier and Florence Wilkins.

Dita’s paternal grandmother was Ruth Lillian Randall (the daughter of Sydney Spearman Randall and Annie Milne Clark). Ruth was born in Toronto, Canada. Sydney was an English emigrant, from Battersea, London, and was the son of James Alfred Randall and Florence Alice Spearman. Annie was a Scottish emigrant, from Edinburgh, and was the daughter of Andrew Clark and Jessie.

Dita’s maternal grandfather was Herbert Archie Groat (the son of Archibald Frederick Herbert Groat and Helen Louise Huthmacher). Dita’s grandfather Herbert was born in Canton, Ohio. Archibald was the son of Craig Aubrey Groat, whose father was from Canada, and who had deep roots in the U.S.; and of Grace Eliza Murley, whose parents were from England, with her father having been from Cornwall. Helen was the daughter of Jacob Huthmacher, whose father, and maternal grandparents, were German, and of Sarah Ann Bendure, who had deep roots in the U.S.

Dita’s maternal grandmother was named Shirley Ann MacKill. Shirley was born in Michigan, and was adopted.