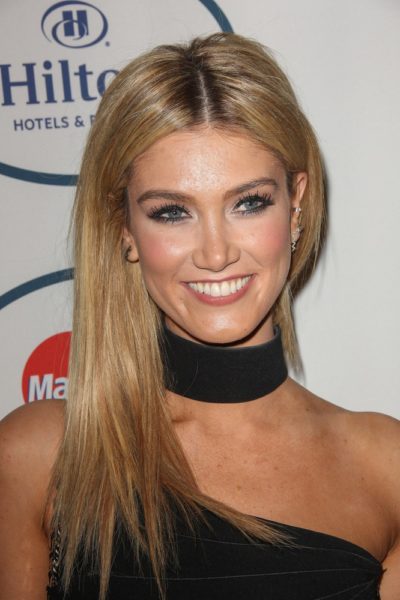 Goodrem in 2014, photo by Prphotos

Delta Goodrem is an Australian singer, songwriter, and actress. She is a cancer survivor.

Delta is the daughter of Lea Christina (Parker) and Denis Goodrem.

Delta’s patrilineal line can be traced back to her third great-grandfather, William Goodrem.

Delta’s paternal grandfather was John Walter “Jack” Goodrem (the son of William Henry Goodrem and Lucy Elizabeth Butcher). John was born in Carlton, Victoria. William was the son of English emigrants, Frederick Francis Goodrem, of Little Glenham, Suffolk, and Alice Lydia Hume, of London. Lucy was the daughter of William George Bennett, whose parents were English, and of an Irish emigrant, Elizabeth Bennett, of Antrim, County Antrim.

Delta’s paternal grandmother was Netta Joyce Stewart (the daughter of John Stewart and Evelyn May “Effie” Henderson). Netta was born in Wedderburn, Victoria. John was the son of David Alexander Stewart, who was a Scottish emigrant, from Ardossan, North Ayrshire; and of Jessie Ritchie, whose parents were Scottish. Evelyn was the daughter of a Scottish emigrant, Robert George Henderson, of Lilliesleaf, Roxburghshire, and of Carey Waterman, whose parents were English.

Delta’s maternal grandfather was Thomas Herbert “Tom” Parker (the son of Thomas Herbert Parker and Florence Daisy Winifred Bray). Delta’s grandfather Thomas was born in Bendigo, Victoria. Delta’s great-grandfather Thomas was the son of Thomas Laidman Parker, an English emigrant, from Haughton le Spring, Durham, and of a Scottish emigrant, Isabella Esther Dillon Plummer, of Monifieth, Angus. Florence was the daughter of Rupert Henry Bray, who was of half English and half Scottish descent, and of Annie Lea, whose parents were English.

Delta’s maternal grandmother was Thelma Myra Pudney (the daughter of Ernest Harwood Pudney and Fredrina Elizabeth Curtis). Thelma was born in Adelaide, South Australia. Ernest was the son of an English emigrant, Stephen Major Pudney, of Chelmsford, Essex, and of Elizabeth Harwood, whose own parents were English. Fredrina was the daughter of John Curtis and Elizbaeth Ann Davis.