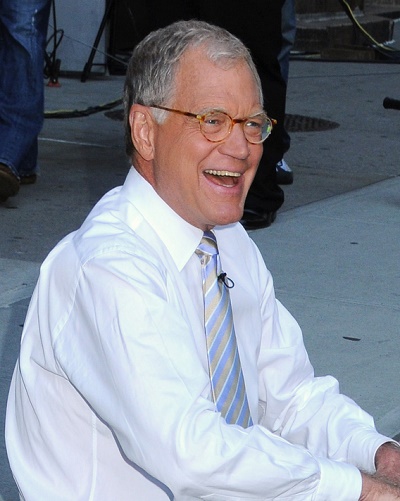 Letterman in 2009, photo by Prphotos

David is the son of Dorothy Marie (Hofert) Mengering and Harry Joseph/Joe Letterman. His father had English, Scots-Irish (Northern Irish), and German ancestry. His mother’s family was of German descent. His surname was spelled Leatherman several generations back. David is married to Regina Lasko, with whom he has a son.

David’s patrilineal line can be traced back to Johann Nickel/Nicholas Leatherman, who was born, c. 1724, in Saverne, Bas-Rhin, Alsace (now in France). Johann immigrated to the U.S. with his parents in 1727.

David’s paternal grandfather was Frank Arastus Letterman (the son of Joseph Letterman and Adalia Adams). Frank was born in Indiana. Joseph was the son of Baker Letterman/Leatherman and Mary Jane Whitson. Adalia was the daughter of Jonathon/John B./D. Adams and Susan/Susannah Darough/Dorrough.

David’s paternal grandmother was Anna M. Devine (the daughter of John Devine and Nettie Linton). Anna was born in Illinois. John was Canadian, and was of Irish descent.