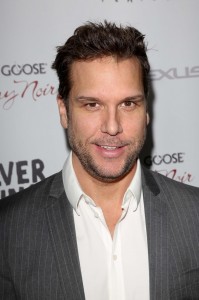 Dane Cook is an American stand-up comedian and film actor.

Dane is the son of Donna Jean (Ford) and George Francis Cook.

Dane’s patrilineal line can be traced to Elias Cook, who was born, c. 1675, and lived in Marblehead, Massachusetts.

Dane’s paternal grandmother was Agnes Emiline/Emmeline/Emma Hagan (the daughter of Francis Hagan and Mary Emily Hughes). Agnes was born on Prince Edward Island. Francis was the son of Thomas James Hagen/Hagan and Ann Hughes. Mary was the daughter of James Hughes and Margaret Morgan.

Dane’s maternal grandfather was James Christopher Ford (the son of Edward Ford and Mary Lombard). James was born in Massachusetts, to Irish parents. Edward was the son of Jeremiah Ford and Nora Murphy. Mary was the daughter of Christopher Lombard and Nora Welsh.

Dane’s maternal grandmother was Phyllis May Smith (the daughter of Clifford Albert Smith and Florence Avilla Creighton). Phyllis was born in Massachusetts, and had English, Irish, and Scottish ancestry. Some of Phyllis’s ancestral lines went back to Massachusetts in the 1600s, and to some of the earliest English immigrants to the United States. Clifford was the son of Payson Francis Smith and Susan Emma Penney. Florence was the daughter of Harlan Page Creighton and Delia A. Howe.