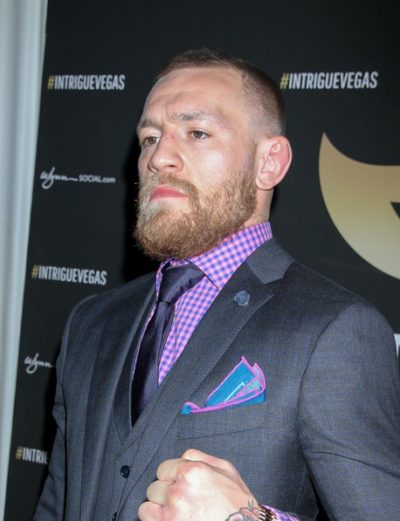 McGregor in 2016, photo by Prphotos

Conor McGregor is an Irish professional mixed martial artist and professional boxer. He is signed to the Ultimate Fighting Championship (UFC). He is known as one of the greatest MMA fighters in the history of the sport.

Conor was born in Crumlin, Dublin, Ireland, the son of Margaret and Anthony J. “Tony” McGregor. His father was born in Wallasey, Cheshire (now part of Merseyside), England, to an Irish father and to an English mother. Conor also has Scottish ancestry.

Conor attended Irish school, and is able to understand the Irish language, which is related to other Gaelic languages, such as Scottish Gaelic. However, he has said that he sometimes struggles with speaking the language, as seen in this video.

Conor has two children with his partner Dee Devlin.

His father encouraged Conor to pursue a plumbing apprenticeship, which he undertook briefly, but Conor knew that showing up to a building site everyday was not the life he wanted. Conor has a boxing and kickboxing background, for which he started training in his youth. He was an All-Ireland boxing champion as a child. He started grappling and training Jiu Jitsu after commencing MMA training.