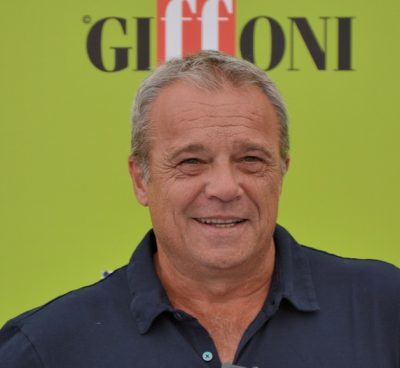 Amendola in 2017, photo by G.L./www.bigstockphoto.com

Claudio Amendola is an Italian actor, television presenter, and director.

He is the son of actors and dubbers Ferruccio Amendola and Rita Savagnone. His father was the Italian voice of Robert De Niro, Al Pacino, Sylvester Stallone, and Dustin Hoffman, among others. His mother has dubbed most notably Vanessa Redgrave, Shirley MacLaine, and Claudia Cardinale. Claudio’s aunt, Anna Maria “Deddi” Savagnone, was an actress and dubber. His great-uncle (grandfather’s brother) was director and screenwriter Mario Amendola. On his mother’s side, Claudio is a first cousin, once removed, of conductor Claudio Abbado.

Claudio is married to actress Francesca Neri. He has two children from a previous relationship, including dubber Alessia Amendola; and a son with Francesca.

Caludio’s paternal grandparents were named Federico Amendola and Amelia Ricci. They were from Rome, Latium, Italy.

Claudio’s maternal grandfather was named Giuseppe Savagnone (the son of Francesco Guglielmo Savagnone and Marianna). Giuseppe was from Palermo, Sicily.

Claudio was baptized as Roman Catholic. Some websites have said that he has Jewish roots. Claudio has stated that this is not accurate.