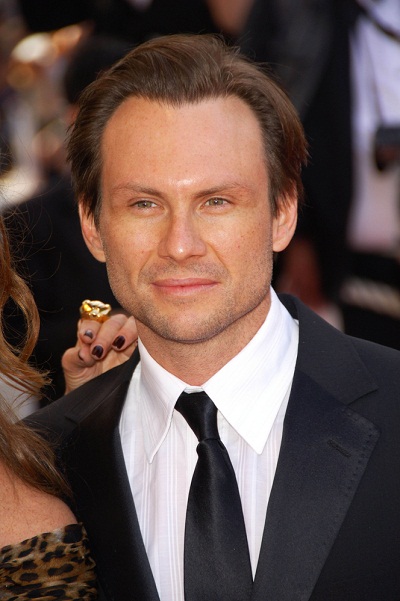 Christian Slater is an American actor and producer. He is the son of Mary Jo Slater (née Lawton), an acting agent turned casting executive and producer, and Michael Hawkins (born Thomas Knight Slater), an actor who is also known as Michael Gainsborough. His half-brother is actor Ryan Slater. In the 1990s, Christian starred in many big-budget films, including Robin Hood: Prince of Thieves and Interview with the Vampire.

Christian is married to Brittany Lopez. He has two children with his former wife, producer and journalist Ryan Haddon.

Christian’s paternal grandfather was Thomas G. “Tom” Slater (the son of Samuel McClure Slater and Virginia Ann Eberhardt). Thomas was born in West Virginia, and was a New York radio personality. Thomas’s brother was Bill Slater (William E. Slater), who was also a prominent radio personality. Christian’s great-grandfather Samuel was born in Pennsylvania, the son of David Henry Slater and Frances Graham. Christian’s great-grandmother Virginia was born in West Virginia, the daughter of Charles Otto Eberhardt, who was born in Pennsylvania, to German parents, and of Mary Barbara Hofman, who was German.

Christian’s paternal grandmother was Helen Margaret Knight (the daughter of Roy Lloyd Knight and Mary Ellen Frack). Helen was born in Ohio. Roy was the son of William Richard Knight, who was English, and of Ellen Jane Lloyd, who was Welsh. Mary Ellen was the daughter of David Morris Frack, whose father was German, and of Margaret Ann Roberts, whose parents were Welsh.