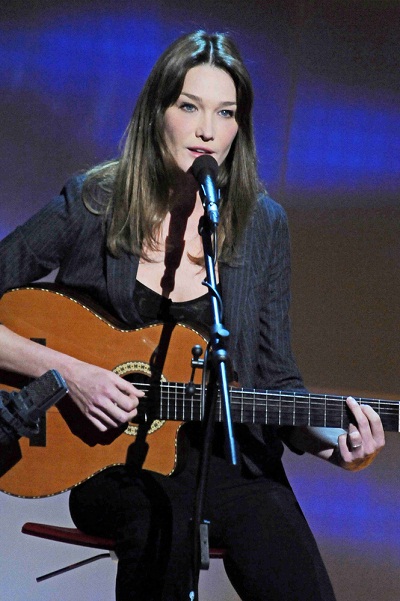 Carla Bruni is an Italian-born, naturalized French singer, songwriter, actress, and model. Carla’s sister is actress, screenwriter, and director Valeria Bruni Tedeschi. Carla is the wife of former French president Nicolas Sarkozy, whom she married at the Élysée Palace on 2 February, 2008. Carla has a son with her former partner, philosophy professor Raphaël Enthoven; and a daughter with Nicolas.

Carla’s mother told her that Carla’s biological father was not Carla’s mother’s husband, Alberto Bruni Tedeschi, a composer and industrialist, but another man, Maurizio Remmert. Maurizio belongs to a rich family of entrepreneurs from Turin, Italy, and has lived in Sao Paulo, Brazil since 1976. If that is accurate, then Carla’s biological paternal grandfather was Giorgio Remmert, who was evidently born in Caselle Torinese, Italy, the son of Andrea Remmert and Rina Piglione. Maurizio is descended from Antonio Remmert, who was born, c. 1823, in Entrup, Prussia, now North Rhine-Westphalia, Germany. He settled in Piedmont, Italy, around 1850.

Alberto Tedeschi was the son of Orsola Bruni and Virginio Bruni Tedeschi (born Virginio Tedeschi). Virginio, who was Jewish, and was from Vercelli, Piedmont, Italy, converted to Catholicism because of anti-Jewish discrimination. He added his wife’s surname, Bruni, to his name.

Carla’s maternal grandfather was Carlo Dominico Enrico Borini (the son of Pietro Borini and Albertina Renand). Carlo was born in Omegna, Piedmont, Italy, and was of half Italian and half French descent. Pietro was the son of Carlo Leopoldo Borini and Francesca Novetti. Albertina was the daughter of Jean Marie Renand and Hélène Deleaval.

Carla’s maternal grandmother was Renèe Louise Planche (the daughter of François Gilbert Planche and Valérie Louise Monnet). Renèe was born in Saint Etienne, France, and was of French ancestry. François was the son of Etienne Planche and Marie Rosalie Rozier.