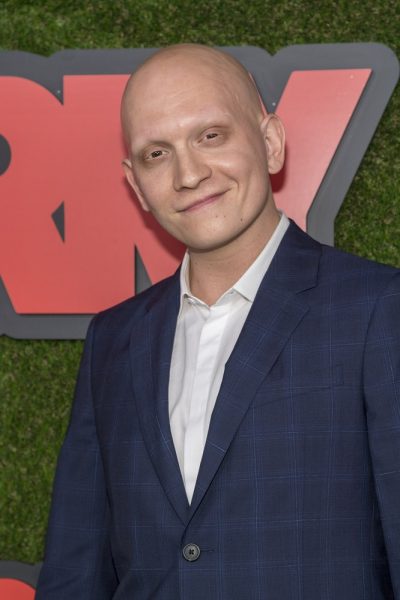 Anthony Carrigan is an American actor.

He has had alopecia areata, an autoimmune disease that causes hair loss.

His father was born in Stockton, Durham, England, of mostly English, and a small amount of Irish, descent.

His mother’s ancestry is one half Portuguese Azorean, three eighths Irish, 1/16th Welsh, and 1/16th Polish.

Anthony’s paternal grandfather was Frederick William Carrigan (the son of Edward Joseph Carrigan and Sarah Ann Watkin). Frederick was born in Wolviston, Durham, England. Edward was the son of George Carrigan, who was Irish, and of Sarah.

Anthony’s maternal grandfather was Leon Edward Kenney (the son of James F. Kenney and Harriet Kosnesky/Korzeneski). Leon was born in Massachusetts. James was the son of English-born parents, Thomas Kenney and Ann Campbell, who were of Irish origin. Harriet was the daughter of English-born parents, Edward Korzeneski, who had Polish and Welsh ancestry, and Annie Philbin, who was of Irish origin.

Anthony’s maternal grandmother was Dorothy Cabral (the daughter of Antonio/Antone Cabral and Mary Leonardo). Dorothy was born in Massachusetts, to Portuguese parents, from the Azores.