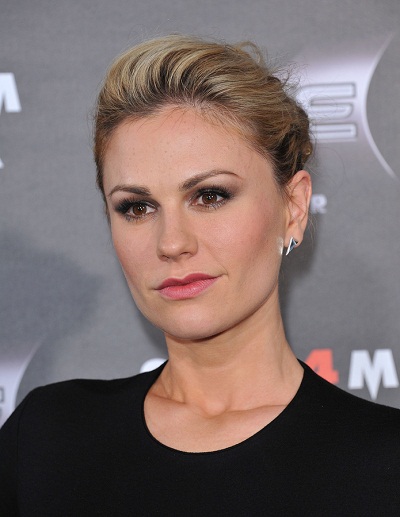 Paquin in 2011, photo by DFree/Bigstock.com

Anna Paquin is a Canadian/New Zealand actress. She won the Academy Award for Best Supporting Actress for The Piano (1993). She has also starred in Jane Eyre (1996), Fly Away Home, A Walk on the Moon, the X-Men films, Darkness, Trick ‘r Treat, Bury My Heart at Wounded Knee, and The Courageous Heart of Irena Sendler, and the series True Blood, among other works.

Anna was born in Winnipeg, Manitoba, Canada, and was raised in Wellington, New Zealand. She is the daughter of Mary and Brian Paquin. Her father is Canadian, and is of French-Canadian and German descent. The surname Paquin is French. Her mother is from New Zealand. Anna has stated that her mother’s family were all Irish immigrants.

Her brother is director Andrew Paquin. Anna is married to English actor Stephen Moyer, with whom she has two children.

Anna is the first millennial, and the first person born in the 1980s, to have been nominated for an Academy Award for acting, and is also the first person fitting either or both descriptions to win (with her Best Supporting Actress Oscar for 1993).

Anna’s paternal grandfather was Albert Paquin (the son of Adélard Paquin and Marie/Maria Allaire). Albert was born in Saint Jude, Québec, and was French-Canadian. Adélard was the son of Paul Joseph Paquin and Marcelline Phaneuf. Marie was the daughter of Charles Allaire and Marie-Josephte Malboeuf/Malleboeuf dite Beausoleil.