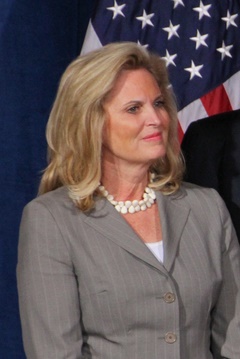 Ann Romney is an American writer and equestrian. She is the wife of American politician Mitt Romney, who serves as a U.S. Senator from Utah, and who was previously Governor of Massachusetts from 2003 to 2007, and the Republican Party’s nominee for President of the United States in 2012. The couple has five children.

Ann is the daughter of Lois (Pottinger) and Edward Roderick Davies. Her father was Welsh, born in Caerau, Bridgend, Wales; he moved to the United States in 1929, where he became an industrialist, founding Jered Industries, a maker of heavy machinery for marine use. He was also Mayor of Bloomfield Hills, Michigan. Her mother was American-born, of Scottish, Northern Irish, and English descent.

Genealogy of Ann’s maternal great-great-great-grandfather, Perez Franklin Cleveland (focusing on his own father’s side) – http://worldconnect.rootsweb.ancestry.com