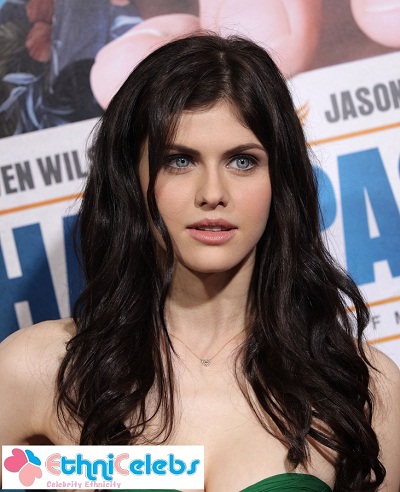 Daddario in 2011, photo by DFree/Bigstock.com

Alexandra Daddario is an American actress and model. Her roles include the Percy Jackson films, Hall Pass, Texas Chainsaw 3D, and the series True Detective, The White Lotus, and Mayfair Witches, among many others.

Her brother is actor Matthew Daddario. Alexandra is married to producer Andrew Form.

Alexandra is a fourth cousin of YouTube personality and vlogger Jenna Marbles, through their third great-grandparents, Luigi D’Addario and Prudenza Mancini.

Alexandra’s paternal grandfather was Emilio Q. Daddario/D’Addario (Emilio Quincy Daddario, the son of Attilio Dante Daddario/D’Addario, Sr. and Giovanna/Giovina Ciovacco). Alexandra’s grandfather Emilio was born in Newton Centre, Massachusetts, to Italian parents, from Abruzzo. A Democratic Party politician, he served as a Member of the U.S. House of Representatives from Connecticut, from January 3, 1959 to January 3, 1971. Attilio was born in Ofena, the son of Antonio D’Addario and Virgilla/Virginia Corradi. Giovanna was born in Loreto Aprutino, the daughter of Enrico Ciovacco and Francesca Ioro.

Alexandra’s maternal grandfather was George Herman Titus (who was possibly the son of George Ellsworth Titus and Mary E. Beiderman/Beidermann/Biedermann). Alexandra’s grandfather George was born in Pennsylvania, and was a many-generations American. He had English and German ancestry. Alexandra’s great-grandfather George was the son of Lemuel Titus and Susan C. Schockly. Mary was the daughter of George M. Biedermann/Biedeman and Sarah Morrison, who was born in New York, to Irish parents, Bernard Morrison and Rose Murphy.

Alexandra’s maternal grandmother was Frieda Anna Szuchy (the daughter of Jacob/Jakab Szuchy and Anna M. Gondzar). Frieda was born in Pennsylvania, to parents who were emigrants from Hungary. Jacob was born in Keresztfalu/Krížová Ves, Slovakia, the son of Mihály Suchy and Anna Klein.

Sources: Genealogy of Alexandra Daddario (focusing on her father’s side) – http://www.geni.com