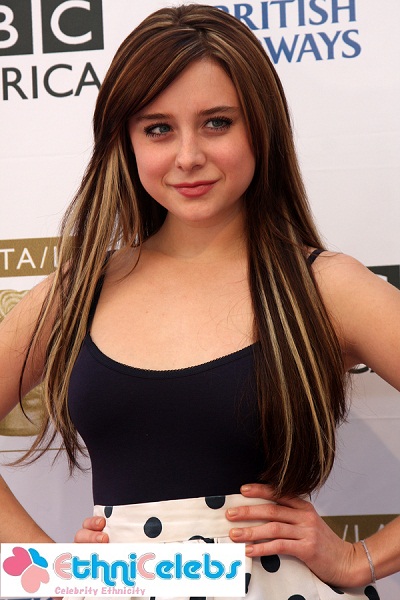 Torresani in 2010, image via kathclick/Bigstock.com

Alessandra Torresani is an American actress. She was born Alessandra Olivia Toreson.

Alessandra’s father has one quarter Tyrolean Italian, as well as Irish, German, English, and some Welsh, ancestry. Alessandra’s mother is of three quarters Polish and one quarter German descent.

Alessandra has stated that she is “half Jewish.” However, this is not correct. Alessandra is not of Jewish heritage. Alessandra is also listed in many places on the internet as being the daughter of Italian immigrants, however she is not; or as being of Italian ancestry. One eighth of her ancestry is Tyrolean Italian, from Trentino-South Tyrol, which was in the Austro-Hungarian Empire at the time of her great-grandfather’s birth. Her great-grandfather listed his language as “Tyrolean;” Tyrol is an area, now split between both Austria and Italy, which had a historically ethnically Austrian and Italian population, among others.

She has also been credited as Alessandra Toreson.

Alessandra’s paternal grandfather was James R. Toreson (the son of Sylvester/Silvio Ludwig/Lodovico Toreson/Torresani and Catherine Boyle). James was born in Pennsylvania. Sylvester was born in Rumo, Trentino-South Tyrol, then in the Austro-Hungarian Empire, now in Italy, and was the son of Luigi/Louis Giovanni Torresani/Toreson and Domenica Caterina Bonan. Alessandra’s great-grandmother Catherine was born in Pennsylvania. Catherine’s father, Manus Boyle, was Irish, the son of Manus Boyle and Mary Ferry. Catherine’s mother, Catherine Elisabeth Lindeman, was German, the daughter of Conrad Lindeman and Anna Dorothea Jane Coleman/Collmann.

Alessandra’s paternal grandmother was Ruth E. Babcock (daughter of Bert H. Babcock and Lulu E. Davis). Ruth was born in Michigan, and had English, and some Welsh, ancestry. Bert was the son of Caleb S. Babcock and Sarah L. Thomas. Lulu was the daughter of Joseph Horace Davis and Willamina Elizabeth Georgina Bothwell.

Sources: Genealogy of Alessandra Torresani (focusing on her father’s side) – http://familytreemaker.genealogy.com