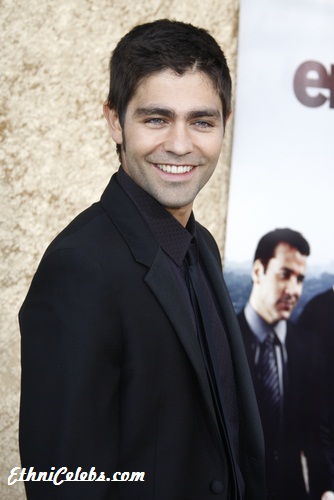 Adrian Grenier is an American actor, producer, director, musician, and envrionmentalist. He is known for his role as Vincent Chase on HBO’s series Entourage, and for appearing in the film The Devil Wears Prada.

Adrian’s mother, Karesse Grenier, was born in New Mexico, of approximately 7/8ths Mexican descent (including Spanish and Indigenous Mexican roots). Many of Adrian’s mother’s ancestors had lived in New Mexico for many generations, since before it became a state. Her other great-grandparent was possibly of French origin. Adrian was not raised around his Mexican/Latino heritage.

A DNA test whose results were displayed on the show Finding Your Roots with Henry Louis Gates, Jr. (2012) stated that Adrian’s genetic ancestry is:

Adrian’s paternal grandfather was Carl Sanford Dunbar (the son of John I. Dunbar and Lydia Martha Phelps). Carl was born in Ohio. John was the son of George Wesley Dunbar and Mary Elizabeth Sanford. Lydia was the daughter of Theodore Austin Phelps and Mary Ellen McCarty.

Adrian’s maternal grandfather was Junio López (the son of Elauterio López and Josefina/Josephita Ester Blea). Junio was born in Colorado. Josefina was the daughter of Norberto Blea and Maria Cesaria Barceló.

Adrian’s maternal grandmother was Priscilla/Pricilla Grenier (originally Greenier, the daughter of Robert Emmit Greenier and Lucaria Ortiz). Prsicilla was born in New Mexico. Robert was the son of Frederick William Grenier, who was almost certainly not Hispanic (he may have had French ancestry), and of Isabel Marcial. Lucaria was the daughter of Rufino Ortiz and Sarita/Sara Maria Gonzales y Ramirez.

Genealogy of Adrian Grenier (focusing on his father’s side) – https://www.wikitree.com

Genealogy of Adrian’s father (focusing on his own father’s side) – http://worldconnect.rootsweb.ancestry.com